Do you love the Epic Spell Wars of the Battle Wizards series? Have you been dying to be a part of the ultra-violent, ultra-fun world of the game? Here’s your chance! Enter our Epic Spell Wars: Become a Wizard Contest by letting your imagination run wild as you create a name and description of yourself as a Battle Wizard. One Contest Winner will be chosen by Epic Spell Wars creator Cory Jones to appear in an upcoming ESW game. Enter by March 18! 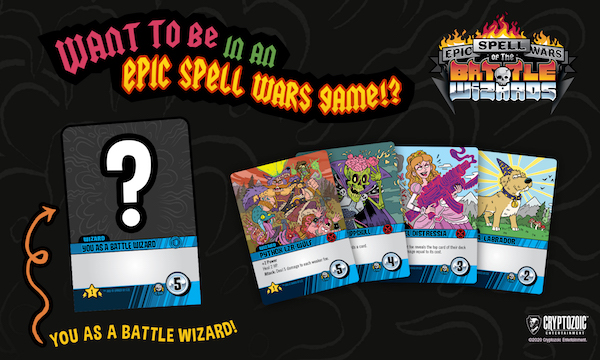 Full Contest rules are below.

NO PURCHASE IS NECESSARY TO ENTER OR WIN.

1. Eligibility: This Contest is open to anyone in the world who is 18 years of age or older as of the date of entry. Void where prohibited.

2. Agreement to Rules: By participating, the Contestant (“You”) agree to be fully unconditionally bound by these Rules, and You represent and warrant that You meet the eligibility requirements. In addition, You agree to accept the decisions of Cryptozoic Entertainment as final and binding as it relates to the content of this Contest.

4. How to Enter: You can enter the Contest by following or liking Cryptozoic on either Twitter, Instagram, or Facebook. Then, you must like the post from Cryptozoic that mentions this Contest on your chosen social media platform. Finally, comment on or reply to the post with the name and short description of yourself as a Battle Wizard. Entries that are incomplete or do not adhere to the Rules or specifications may be disqualified. You can only enter one time.

5. Prizes: One (1) winner will be announced after Epic Spell Wars creator Cory Jones has a reasonable amount of time to review entries and choose the winner after the Contest concludes. The winner will have their likeness and the name and description of their unique Battle Wizard depicted on a card in an upcoming game in the Epic Spell Wars series.

No cash or other prize substitution shall be permitted. The prize is non-transferable. No substitution of prize or transfer/assignment of prize to others or request for the cash equivalent by Winner is permitted.

6. Winner Selection and Notification: Winner will be selected by Cory Jones from all entries submitted on the dates above and will be announced at some point after the Contest ends on March 18. Winner will be notified by direct message via social media within five (5) days following selection of Winner. Cryptozoic Entertainment shall have no liability for Winner’s failure to receive notices due to spam, junk email, or other security settings, or for any Winner’s provision of incorrect or otherwise non-functioning contact information. If a Winner cannot be contacted, is ineligible, fails to claim the prize within three days from the time award notification was sent, or fails to timely return a completed and executed declaration and release as required, the prize may be forfeited and an alternate Winner selected.

8. By entering, You, the Contestant, have affirmatively reviewed, accepted, and agreed to all of the Official Contest Rules.