Lake Forest, CA – June 28, 2021 – Cryptozoic Entertainment, leading creator of tabletop games, trading cards, and collectibles, today announced the launch of the Kickstarter campaign for Epic Spell Wars™ of the Battle Wizards: ANNIHILAGEDDON 2 — XTREME NACHO LEGENDS. The second deck-building game set in the world of Epic Spell Wars features the trademark over-the-top, mature humor and art that players have come to expect, as well as gameplay innovations like the Legendary Line-Up and Nacho Power Chips. Fans can check out the Kickstarter page now to pledge for the game and other rewards. 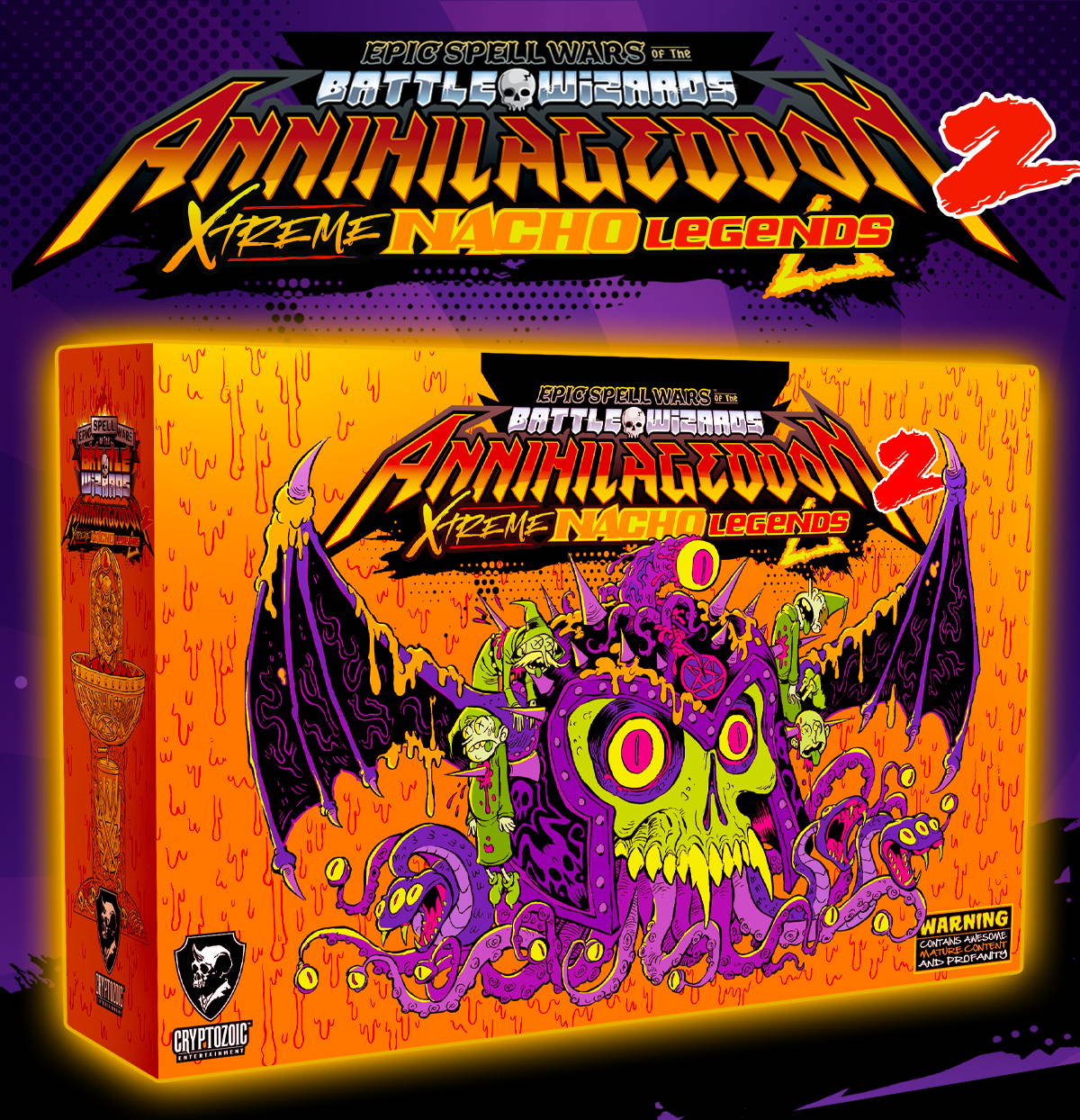 The campaign includes several exclusives, including the expansion Epic Spell Wars of the Battle Wizards: ANNIHILAGEDDON — Gang Bangers. Retailers can participate in the campaign via a special tier.

“The first Epic Spell Wars: ANNIHILAGEDDON was, for me, pound-for-pound the best game Cryptozoic has ever made, so with ANNIHILAGEDDON 2 we are really throwing out all the stops to make it even better,” said Cory Jones, creator of Epic Spell Wars. “The art and gameplay are even more insane, with nachos and other new elements added to the experience. If you love hyper-competitive games with big moments that you and your friends will be talking about for weeks—if not years—afterwards, you should jump aboard this Kickstarter!”

Like the first game, ANNIHILAGEDDON 2 utilizes the Brawl version of Cryptozoic’s Cerberus Engine as 2-5 players become Wizards and try to buy magical Spell, Wizard, Treasure, and Creature cards—among other card types—in order to defeat their opponents and become the Annihilageddon Tournament Champion. 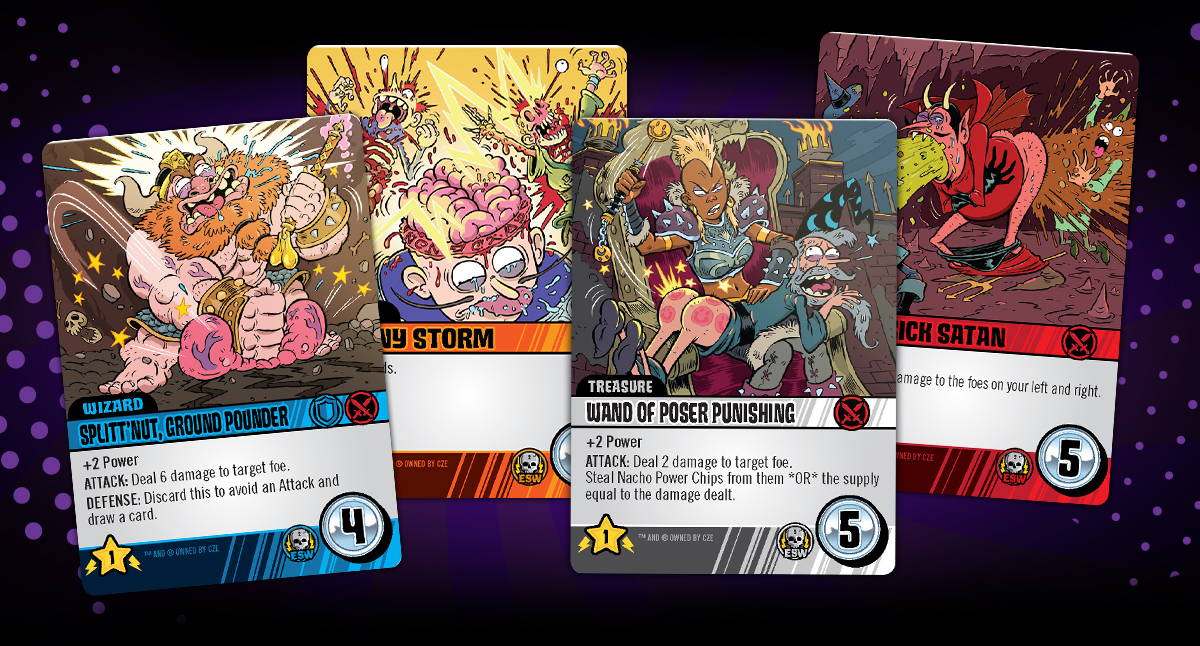 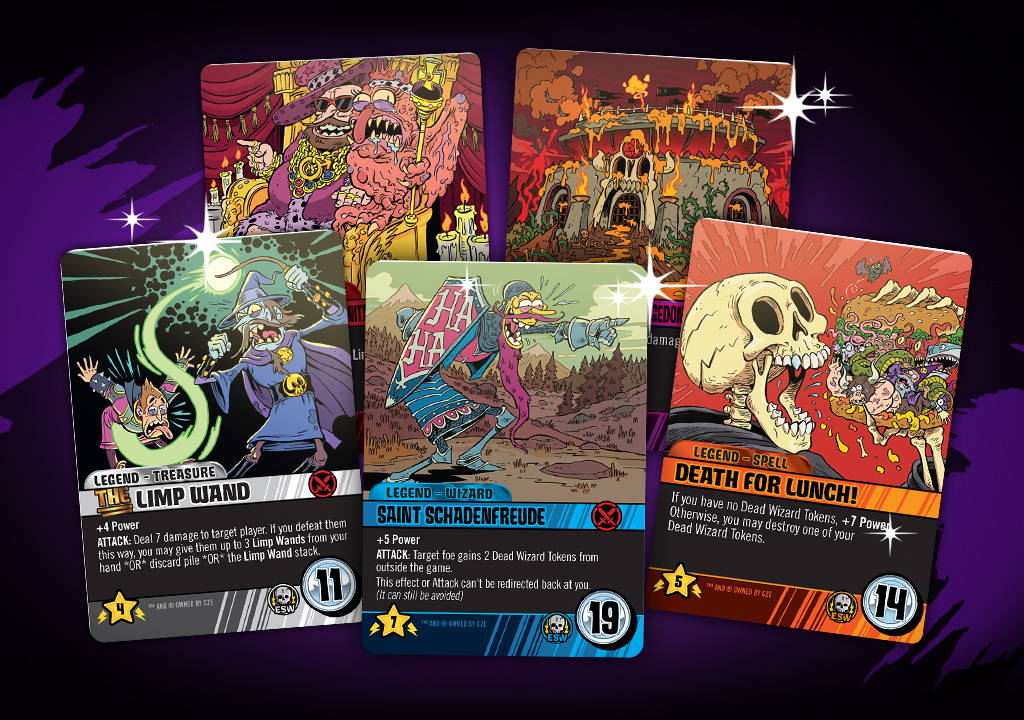 The Legendary Line-up adds a second row of cards that players can buy. These cards are expensive, but extremely powerful. In addition, the game introduces Nacho Power Chips that can charge up cards as you play them or give you the power to buy Legendary Cards. 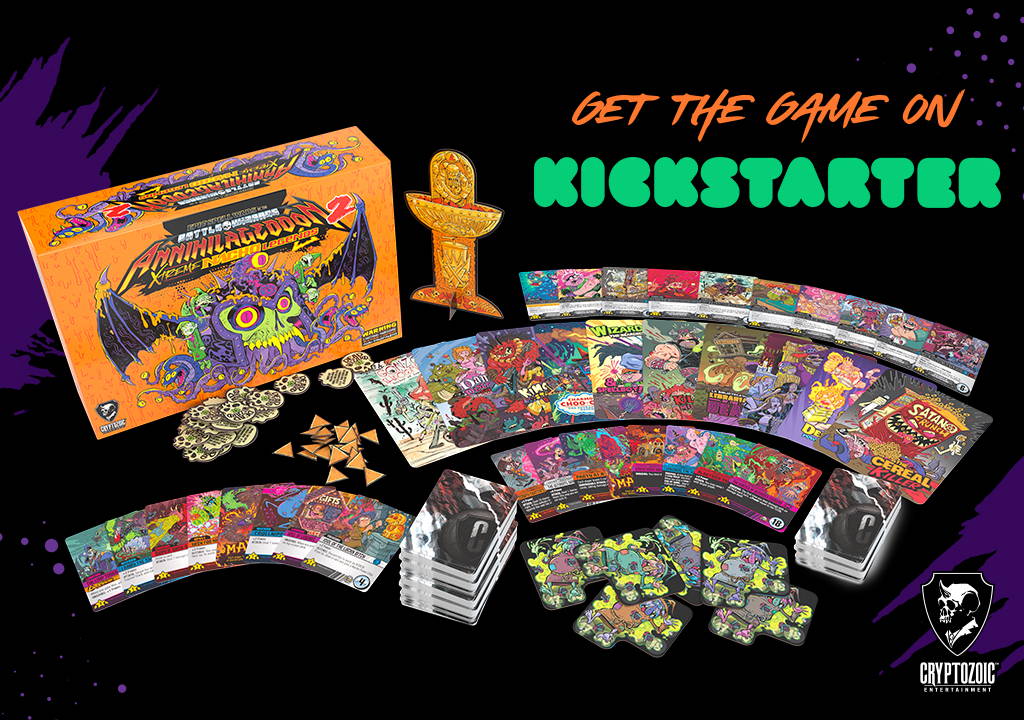 Epic Spell Wars of the Battle Wizards: ANNIHILAGEDDON — Gang Bangers is an expansion that is a Kickstarter exclusive. It requires either the first or second ANNIHILAGEDDON game, and gives players an entirely new way to play. Players get Gangs, each of which is unique and features different Gangsters that can be recruited to help defeat enemies. The expansion also replaces the Legend boss stack with Legendary Treasures, a pile of powerful cards that ramp up the damage. 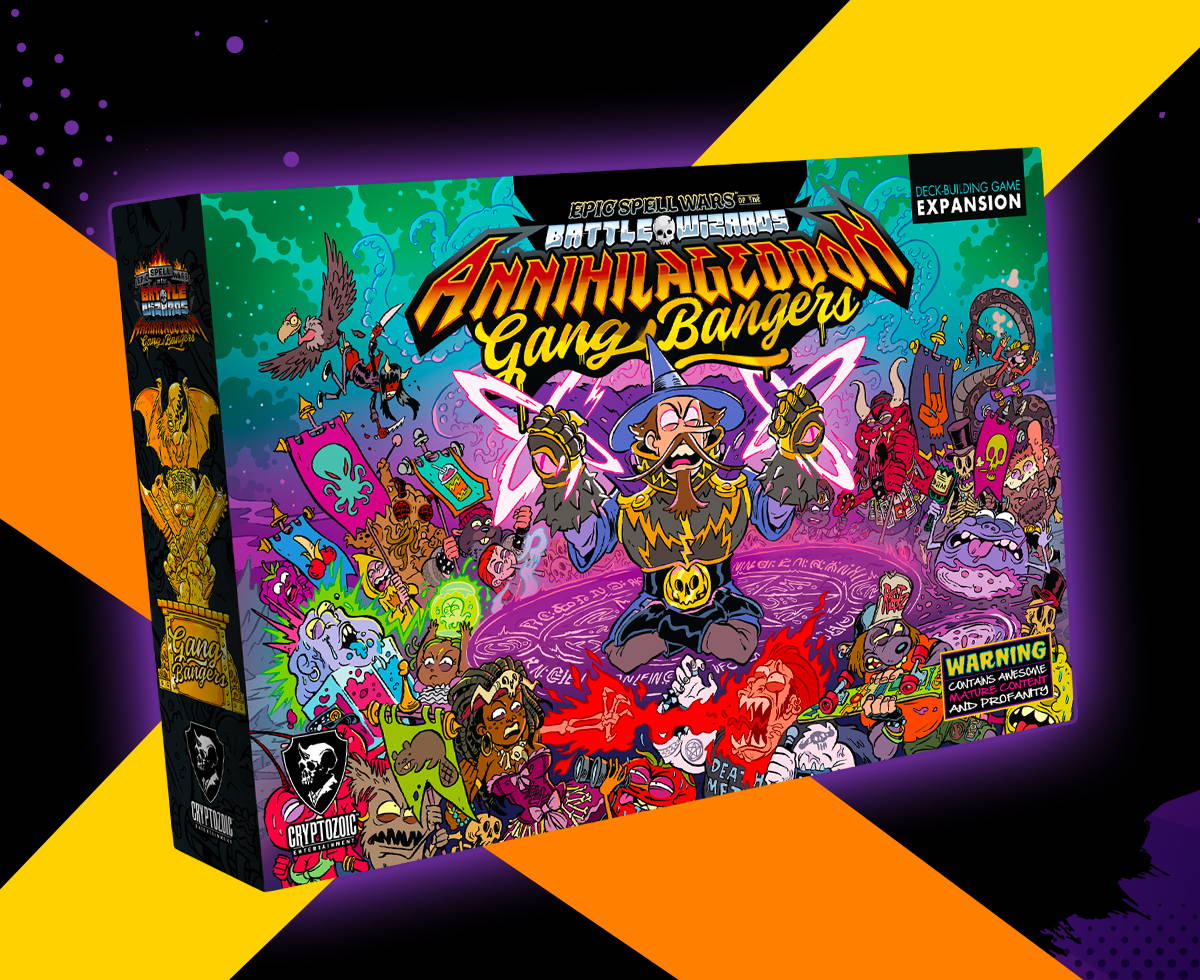 Epic Spell Wars of the Battle Wizards: ANNIHILAGEDDON 2 — XTREME NACHO LEGENDS, along with the Gang Bangers expansion, is available to order on Kickstarter starting today. 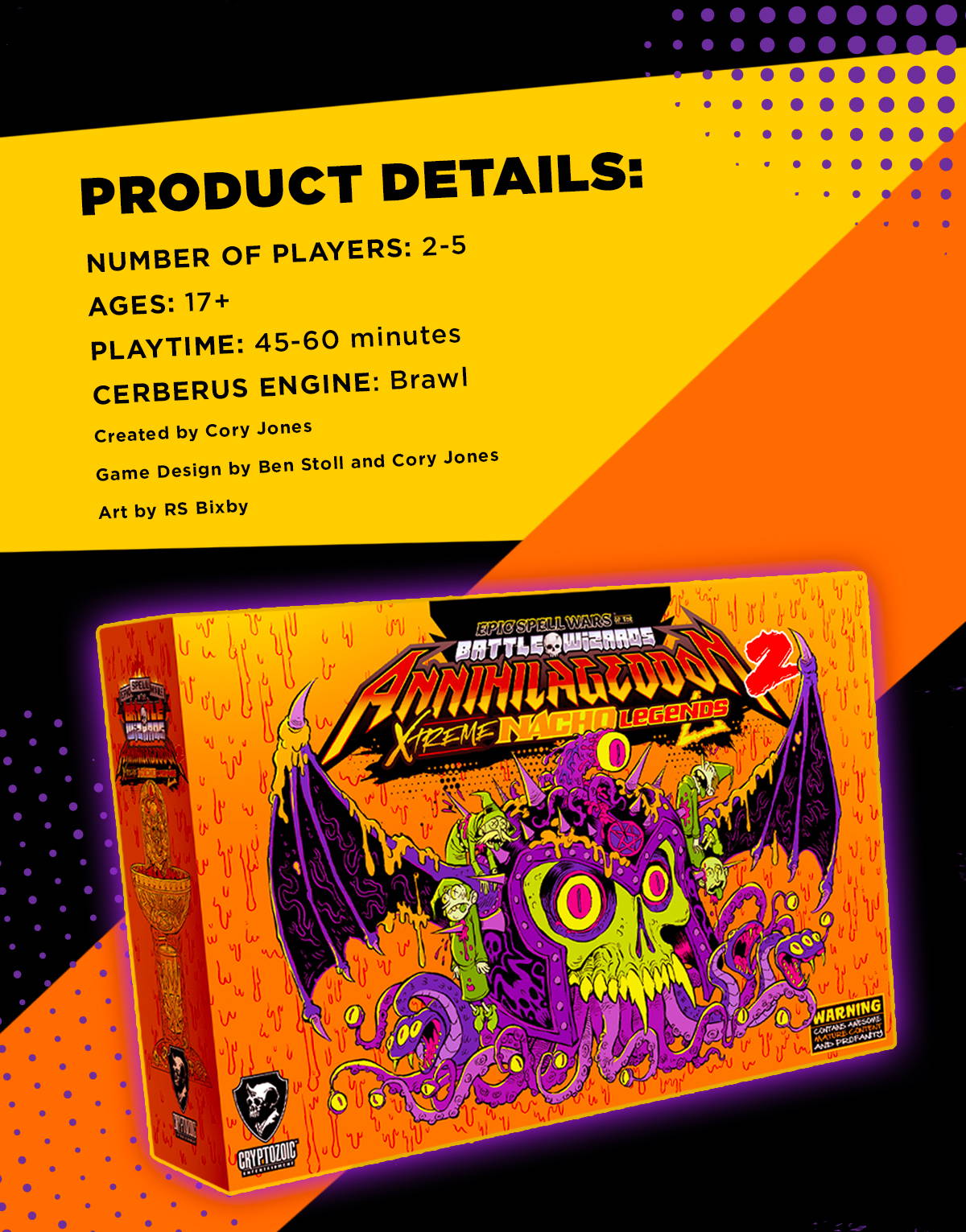