Cryptozoic’s motto, “Fans First,” is a promise to our community. It means that our fans’ experience is our top priority, and it also means we ourselves are diehard fans who strive to speak the language of a particular TV show, comic, movie, or video game. In this third installment of our “Fan’s First” blog, I’m going to share a bit about my love and admiration for the Outlander TV series, and how it has inspired me to make great trading card products. 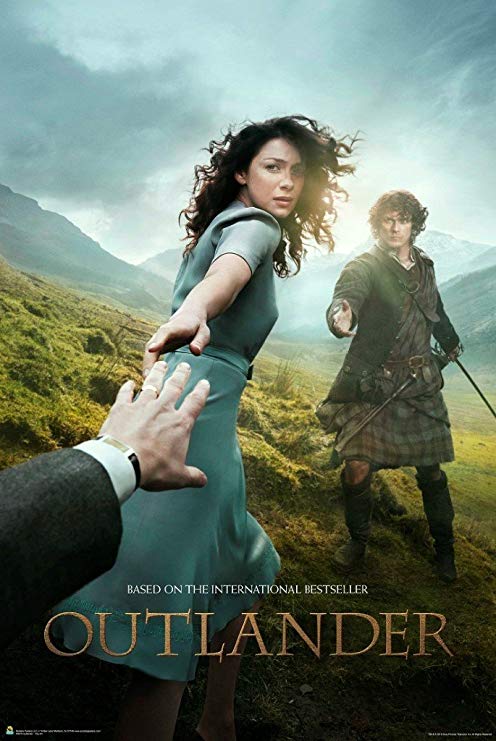 My introduction to Outlander came when I was on Cryptozoic’s digital collectibles team creating stickers and cards for the Outlander Channel on the Quidd app. At first, admittedly, Outlander didn’t seem to fit in with the other properties with which Cryptozoic was associated. It wasn’t based on a comic book, there were no superheroes, and there wasn’t the unabashed crudity seen in other properties like Rick and Morty or Epic Spell Wars. But in spite of these things (which I hold dear) being absent, Outlander triumphantly won me over.

At its core, Outlander is a love story, one that pulls characters away from one another both geographically and temporally (thanks to the characters’ ability to time travel). Even though none of us can actually pass through the stones of Craigh na Dun and find ourselves in the middle of the Scottish Jacobite uprising, we can all relate to the pain of being separated from the ones we love, and the rapture that comes with being in their arms again. This is what hooked me initially, and what has kept my eyes glued to the lives of Claire, Jamie, and the rest of the Fraser family ever since. 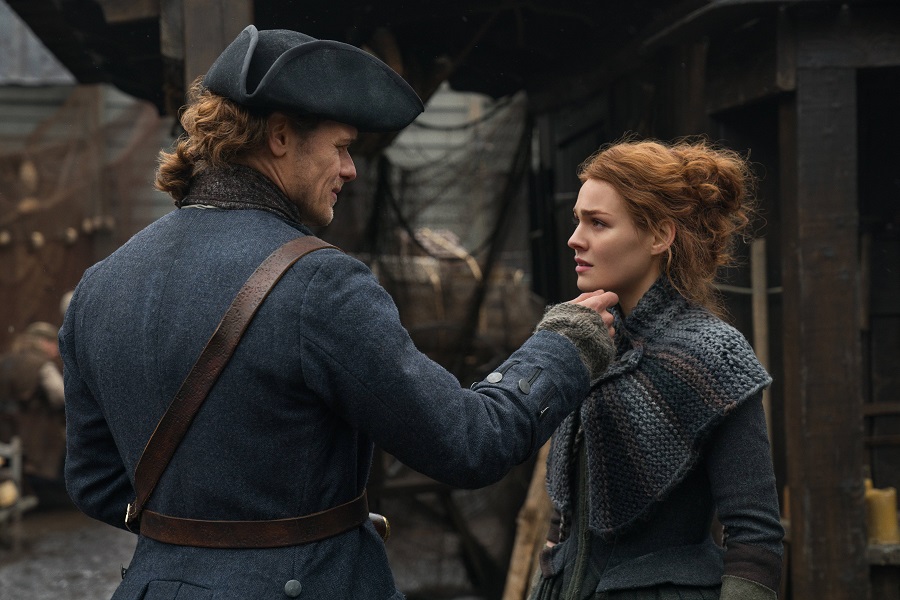 My favorite episode of the show is “The Birds & the Bees” from Season 4. Like Season 3’s “A. Malcolm,” it’s what I like to call a “dramatic meeting episode,” which is basically an episode in which two characters meet for the first time, or see each other after years of being apart. In this episode, Brianna wanders around 17th century North Carolina on a quest to find her parents. Since she’s from the future, it’s a fish-out-of-water experience for her. When she stops to speak with a local man, she discovers that he is in fact Jamie Fraser, her biological father whom she is meeting for the very first time. It’s a powerful moment, and scenes like these imbue the show with relatability, in spite of its time-traveling narrative. My family, like many others, is scattered around the world, and there are sometimes several years that pass before we can all see each other again. When I watch moments like Brianna meeting her father, or Claire finding Jamie at the A. Malcolm print shop, it strikes a chord with me because I can empathize with these characters and their longings for one another.

As storied as Outlander’s history is as a work of fiction and TV show, I quickly learned that its fanbase was just as interesting to follow. My predecessor, George Nadeau, was instrumental in creating interest in our Outlander trading cards and for sowing the seeds of a fandom that is now one of our largest and most devoted. Not only do Outlander trading card fans collect, but they also manage dozens of collecting communities on social media, in which they exchange and discuss trading cards with one another. These groups are essential for us to get to the core of what fans are looking for, and by making myself part of the conversation, I am inspired to make better trading cards that are tailor-made to what fans expect. 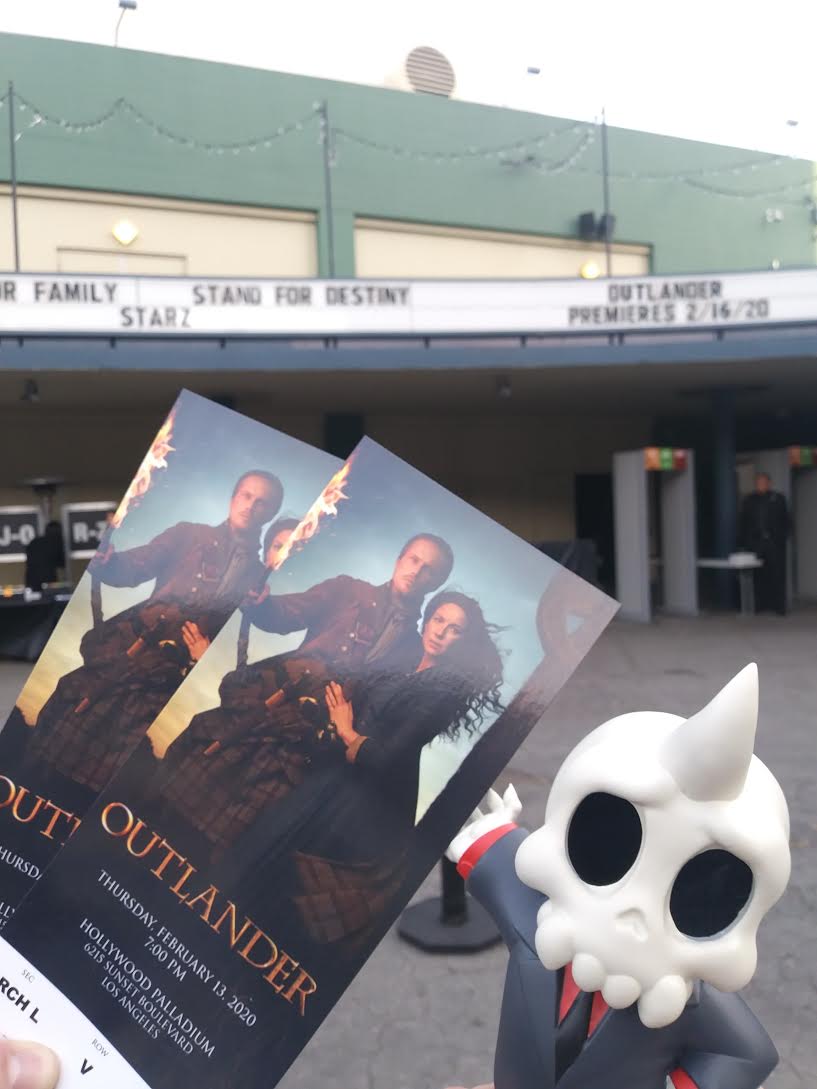 But as much fun as it is chatting on social media, it’s even better when I can meet these fans in person. One of the highlights of my career was being invited by Starz to attend the Outlander Season 5 premiere in Hollywood this year. I, along with hundreds of other ecstatic Outlander fans, filled the Hollywood Palladium to watch the newest episode, with the cast and crew right there in the audience with us! After snapping some pictures on the red carpet (Bob, Cryptozoic’s brand mascot, was front and center), and enjoying the screening, I hosted a fan meet-and-greet at the Scum and Villainy Cantina just a few blocks away. Here, I passed out free promo cards, conducted a raffle for Outlander prizes, and met several fans for the very first time. The camaraderie of the Outlander community is incredibly endearing, and after spending months (sometimes years) developing trading card products, it’s so rewarding to meet fans face-to-face and hear all about their favorite cards. 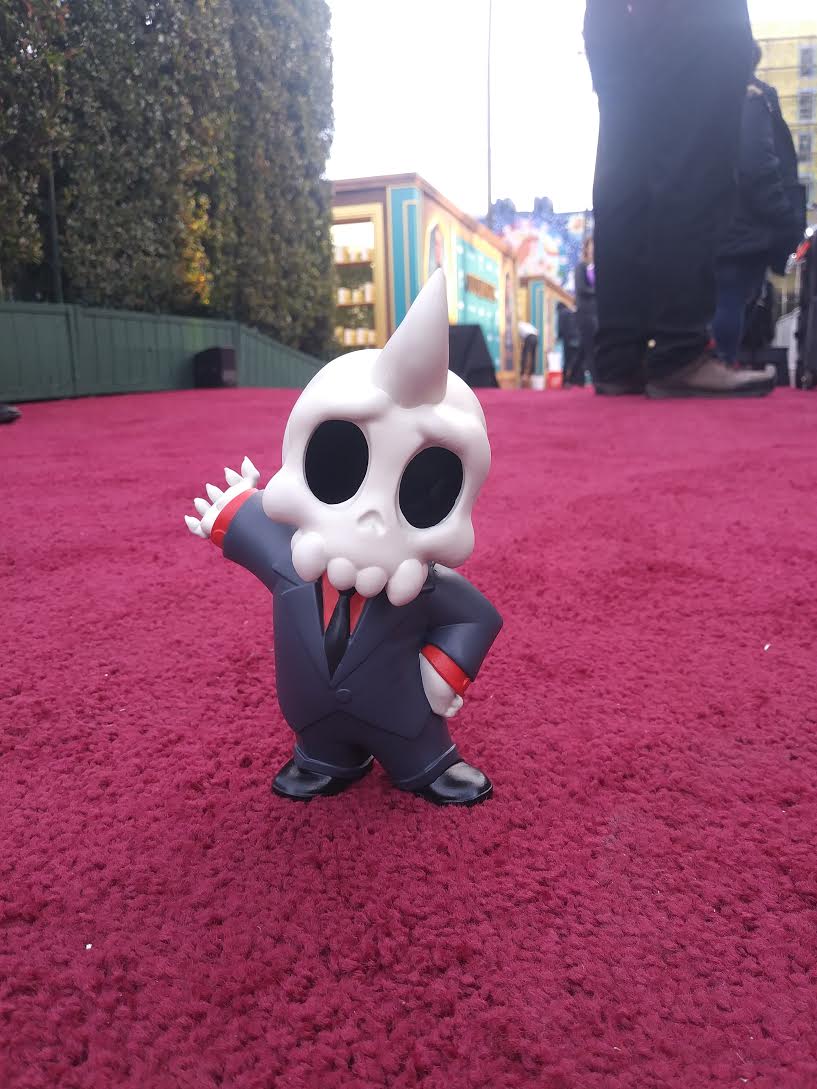 Speaking of meeting people face-to-face, the coolest moment I have had working at Cryptozoic was when I flew to Glasgow, Scotland to meet the kilt-wearing, Sassenach-saving, heart-breakin’ Scotsman himself: Mr. Sam Heughan. It was technically a business trip, but I’d be lying if I said it didn’t feel like a vacation—in fact, as I write this, I am actively trying not to do an Anthony Bourdain impression and write an essay about the beauty and majesty that is Scotland. 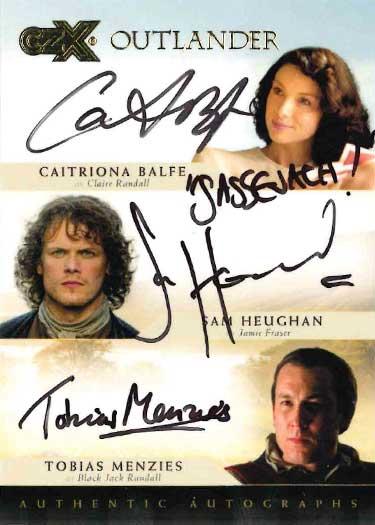 I was sent on this trip, of course, to obtain signatures on Autograph Cards for our CZX Outlander and Outlander Season 4 sets. A lot of these cards were duals and triples, which meant they were already signed by other cast members, and Sam Heughan’s signature was the last piece we needed to make these products even exist. So yeah, you could say this trip was kind of a big deal. Even on brief walks from taxis to my hotel, I felt that the bag containing the cards should have been handcuffed to me casino-style to avoid being stolen.

On the day of the signing, we arranged to meet at a local office where I had coffee and croissants ready for him. Anxiously peering out of the third story window at the street below, I anticipated his arrival by laying out all of his cards on a table, along with pens and the necessary paperwork. My goal was to make him feel comfortable and to make the signing fun, fast, and easy. After rehearsing my opening line for what felt like the millionth time, I finally noticed a motorcyclist pulling up to the curb on the street below. Even from this distance, and with his helmet on, I was somehow certain it was him. Being that the building required a buzzer to let anyone in, I had the irrational fear that Sam would leave if the door didn’t open for him right away. I sprang into action and ran to the stairwell so that I could make it down in time to open the door without any delay. Leaping down huge chunks of steps at a time, I nearly collided into Sam head-on as I turned the corner near the bottom. If I had blinked, I would have slammed him down the stairs and made enemies of Outlander fans everywhere... Luckily, I stopped just short and was suddenly standing chest-to-chest with the man himself. He still had his motorcycle helmet on, with the visor flipped up so I only saw his eyes, and he said, very coolly, something to the effect of, “Hey, man.” 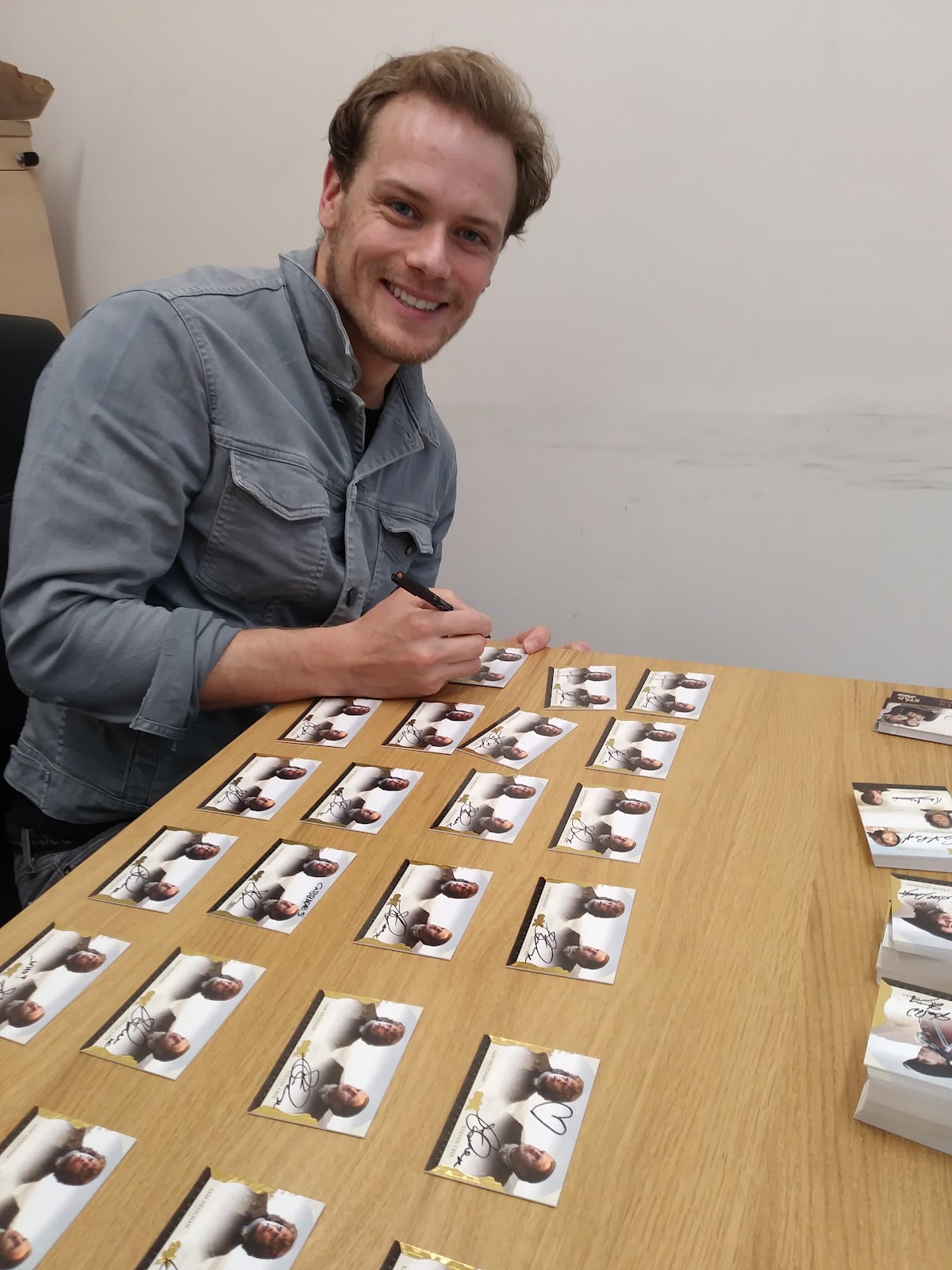 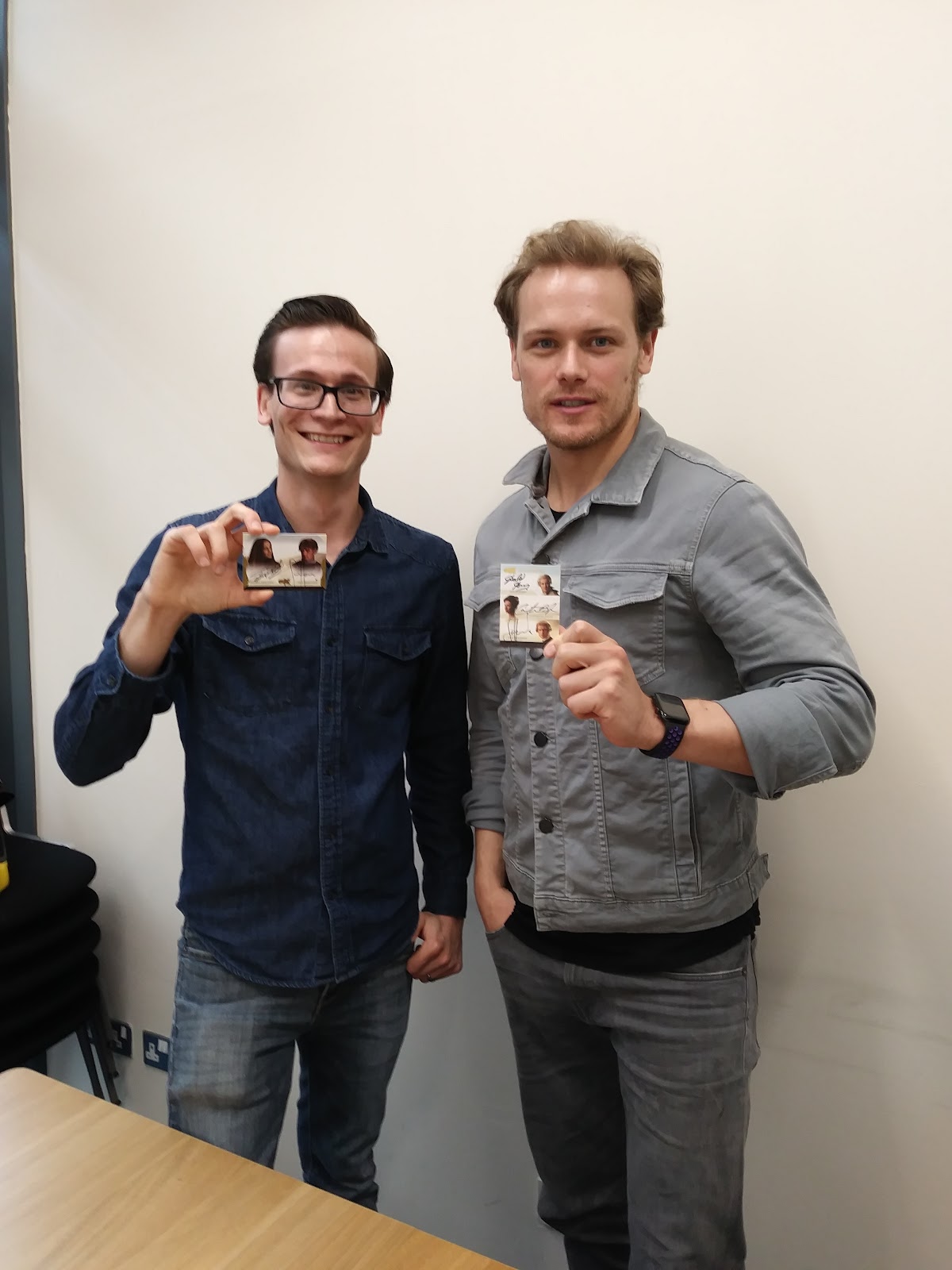 Instantly, his kindness put me at ease and I began talking to him like an old friend. He was an active listener who nodded along when I explained the autograph-signing process, and he asked enough questions to convince me he was genuinely curious about our products and pleased to be involved in some way. It’s cliché to say celebrities are “down-to-earth”, but if ever there was a star who deserves this title, it’s Sam. The signing took about 45 minutes, during which we mostly discussed Netflix shows and good places to eat in Glasgow (shout out to Ashton Lane). Afterwards, we shook hands, took some photos and he was off on his way “back to set.” They were apparently filming Season 5 at a nearby village during this time. Sam’s autographs can be found in our upcoming Outlander Trading Cards Season 4 release, along with new and exciting Wardrobe Cards, Base and Chase Sets. The subset I am most excited for is the Playing Cards Chase Set. This is a brand new concept that we’ve never done before. In each hobby box, there will be a 25th pack containing 13 playable cards of a particular suit (heart, spade, club, diamond), all designed with a classic playing card aesthetic. It will take about four boxes to complete the subset, but once you do, you will have a fully playable deck of 52 Outlander playing cards featuring character images from Seasons 1-4. Naturally, we made Jamie and Claire represent the ranks of king and queen, and “Black Jack” Randall was given the rank of jack because—well, it was just too perfect. There will also be foil variants of all 52 cards falling at one-per-pack, so there is a lot to get excited for in this upcoming release. 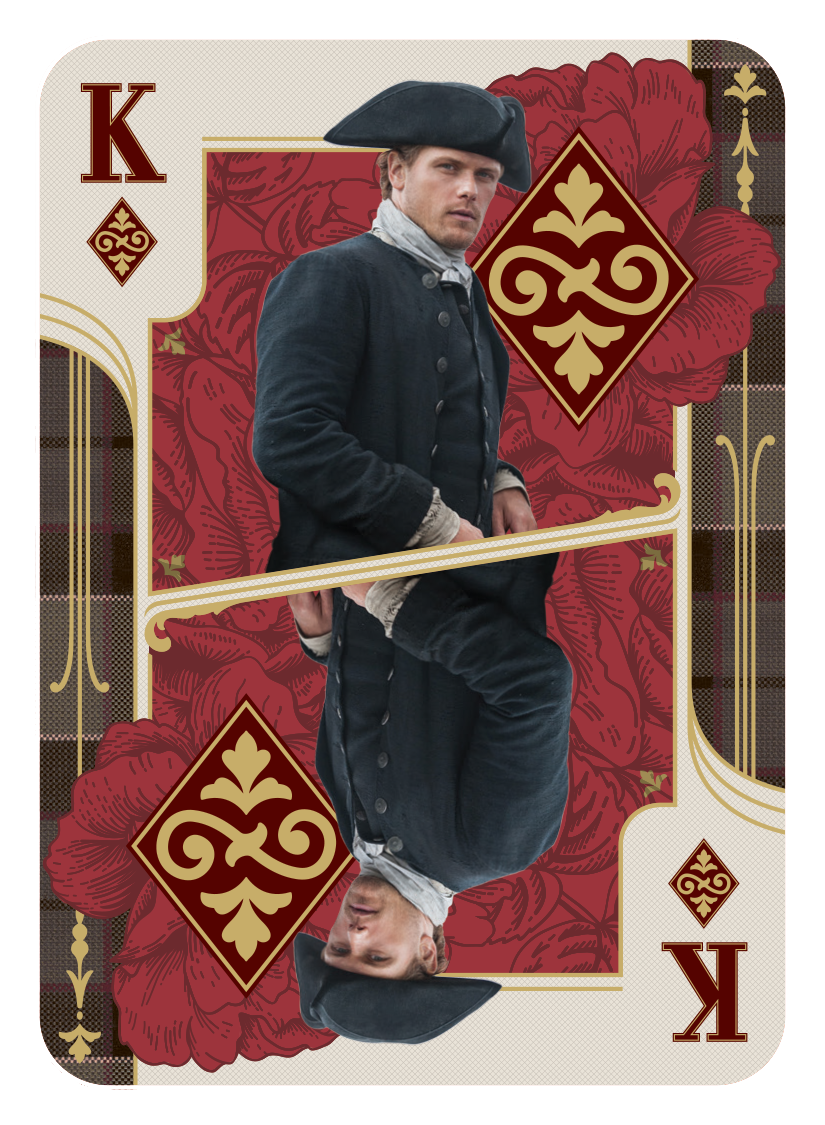 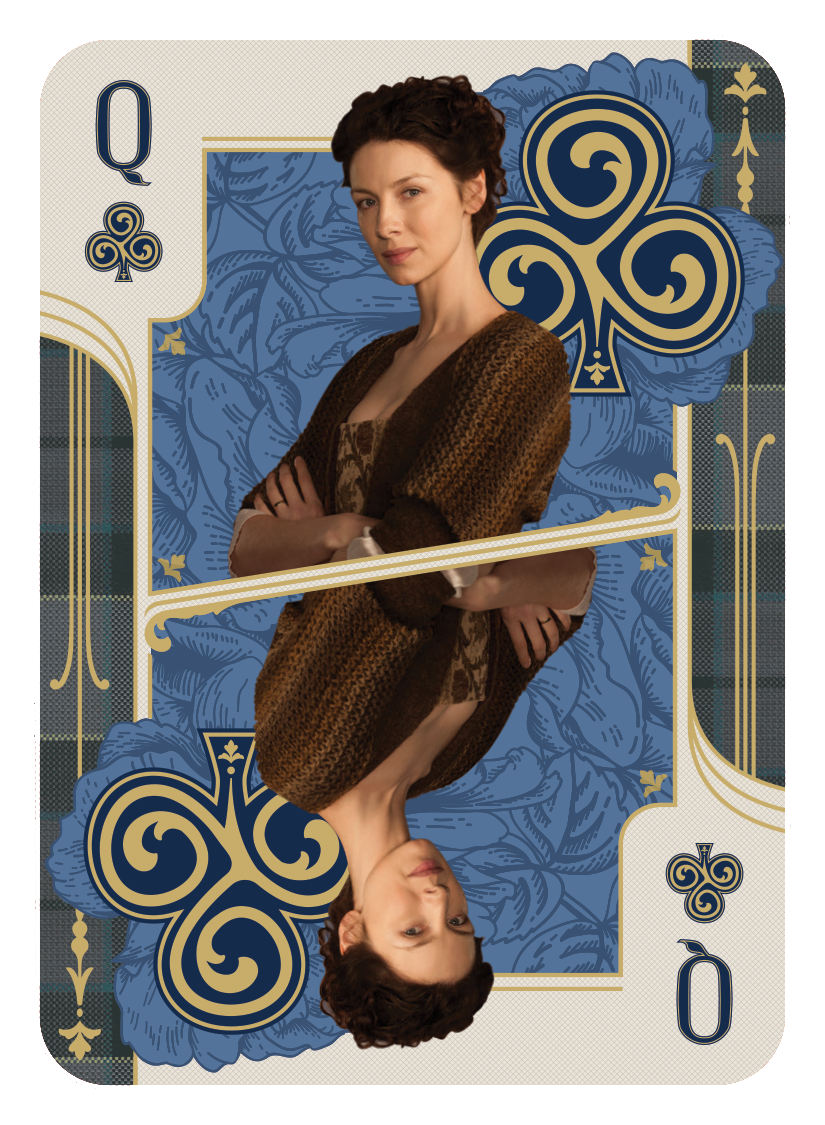 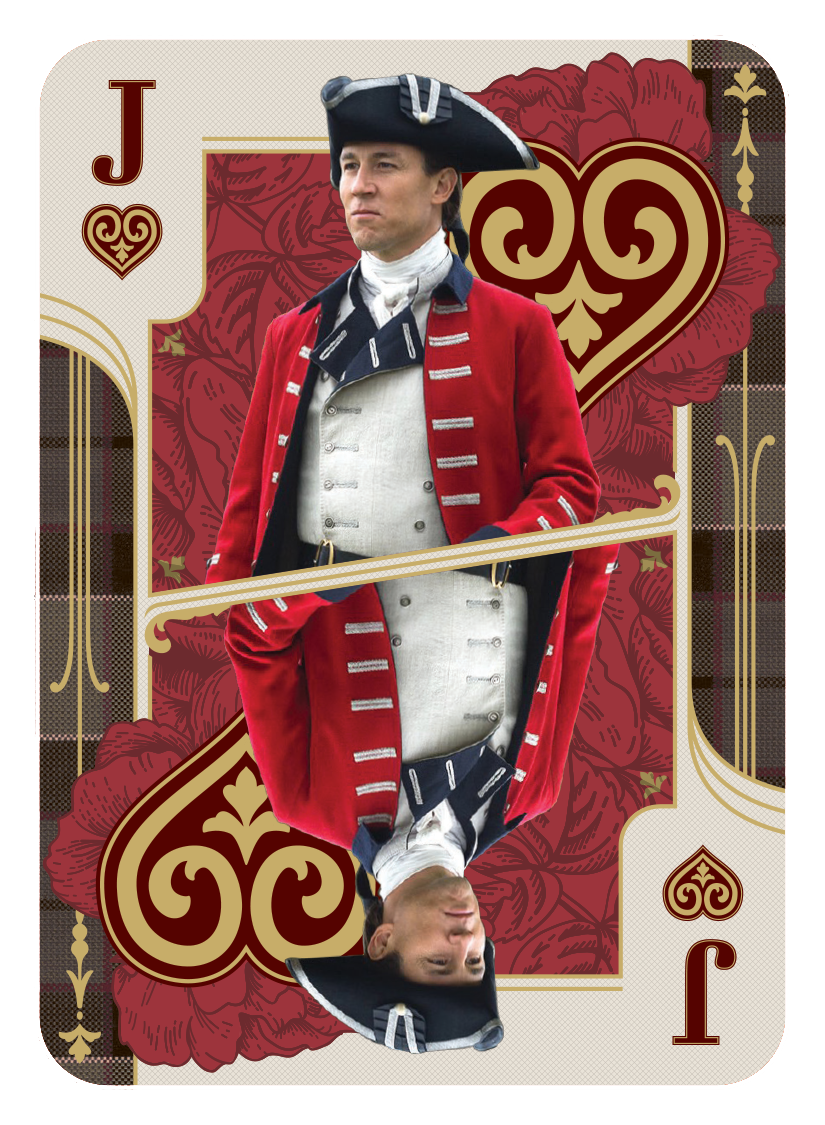 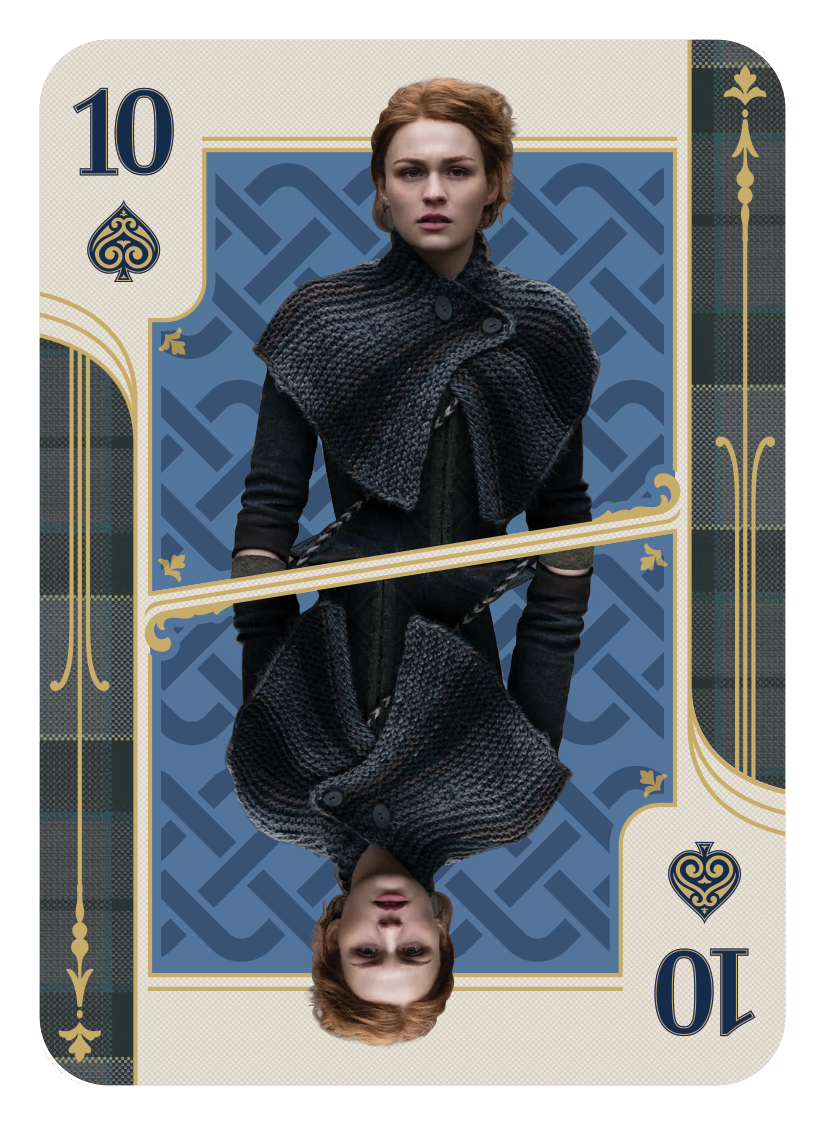 Working on Outlander products, and trading cards as a whole, for the past two years has been an absolute honor and a privilege. I get to watch a show that is beloved to so many people, and then adapt it into a product that people will collect and cherish. This is a job I’ve wanted since I began collecting basketball and Pokémon cards as a child, and the fact that I can channel my creativity through amazing shows like Outlander makes it all the better.