Lake Forest, CA – August 7, 2020 – Cryptozoic Entertainment, leading creator of tabletop games, trading cards, and collectibles, today announced the August 12 release of Epic Spell Wars™ of the Battle Wizards: Hijinx at Hell High. The fifth entry in the hugely popular Epic Spell Wars spellcrafting card game series brings all the trademark over-the-top humor and art to the world of high school. In the game, 2-6 players move up and down the Social Status Board, which ranges from the Ultimate Loser to Class President, and utilize the new keyword “Bully” as they try to annihilate their fellow Wizards. 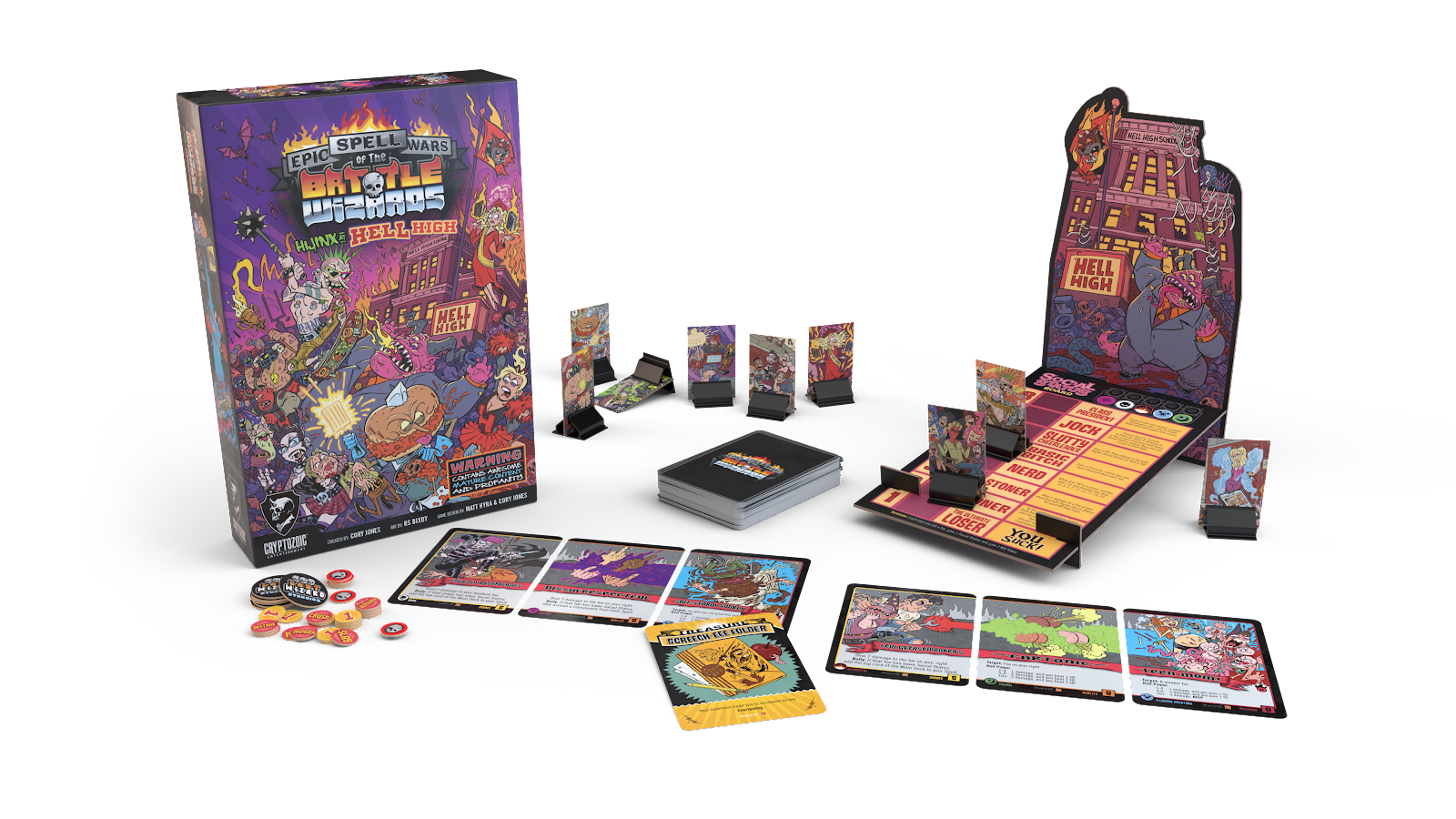 The game looks to continue the growing popularity of the Epic Spell Wars series, which has gained a legion of fans since the first game was featured on TableTop, the web series hosted by Wil Wheaton on Geek & Sundry, a YouTube channel with over 2.12 million subscribers. In addition to the five spellcrafting games, Cryptozoic released Epic Spell Wars™ of the Battle Wizards: ANNIHILAGEDDON Deck-Building Game last year, which will have its own upcoming expansions.

“As we wondered how to set the fifth Epic Spell Wars game in the most horrible, evil, blood-thirstiest place in all of creation, the answer quickly became obvious: high school!” said Cory Jones, the creator of Epic Spell Wars. “The art, card names, and card effects are all inspired directly by high school experiences. As players channel their fury into red-hot death spells, it’s going to depend partly on their Social Status. It all leads to an Epic Spell Wars experience that will let you relive your own traumas while casting spells and having tons of fun!” 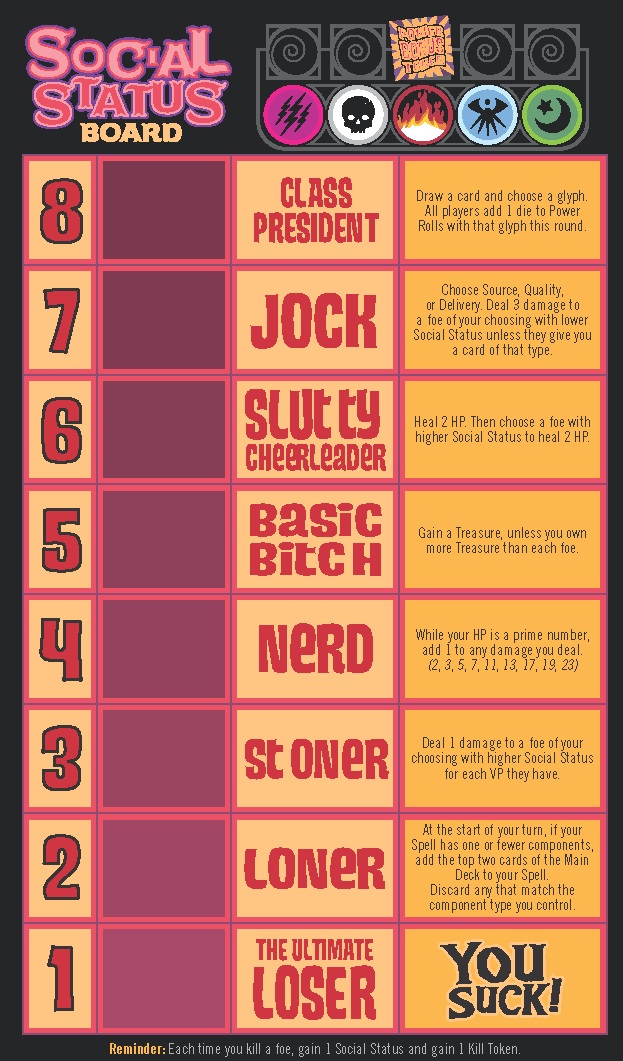 In Epic Spell Wars of the Battle Wizards: Hijinx at Hell High, the most significant gameplay innovation is the Social Status Board, which is inspired by stereotypical high school social roles. In each round, players get to resolve the abilities granted them by their Social Status, starting with Class President at the top (Rank 8) and moving down to the Ultimate Loser at the bottom (Rank 1). Players can track their Social Status using their Wizard Standees. There are many cards that allow players to gain Social Status, or cause others to lose it. In addition, many cards reference positions on the board, mainly in relation to whether a player is higher or lower than the opponent they wish to target.

Also new to the series is the keyword “Bully.” When a card with a Bully effect resolves against a foe with lower Social Status, it either adds a card to the Bully player’s Spell or removes a card from their opponent’s Spell.

Though standalone, the game is fully compatible with the four previous games in the Epic Spell Wars spellcrafting series and can be combined with them for an even bigger experience. The oversized Wizards from this game can be also used in Epic Spell Wars of the Battle Wizards: ANNIHILAGEDDON Deck-Building Game. Likewise, the oversized Wizards from that game can be used in this title.

Epic Spell Wars of the Battle Wizards: Hijinx at Hell High will be available August 12 at retailers across the U.S. and the Cryptozoic Store for a retail price of $30. 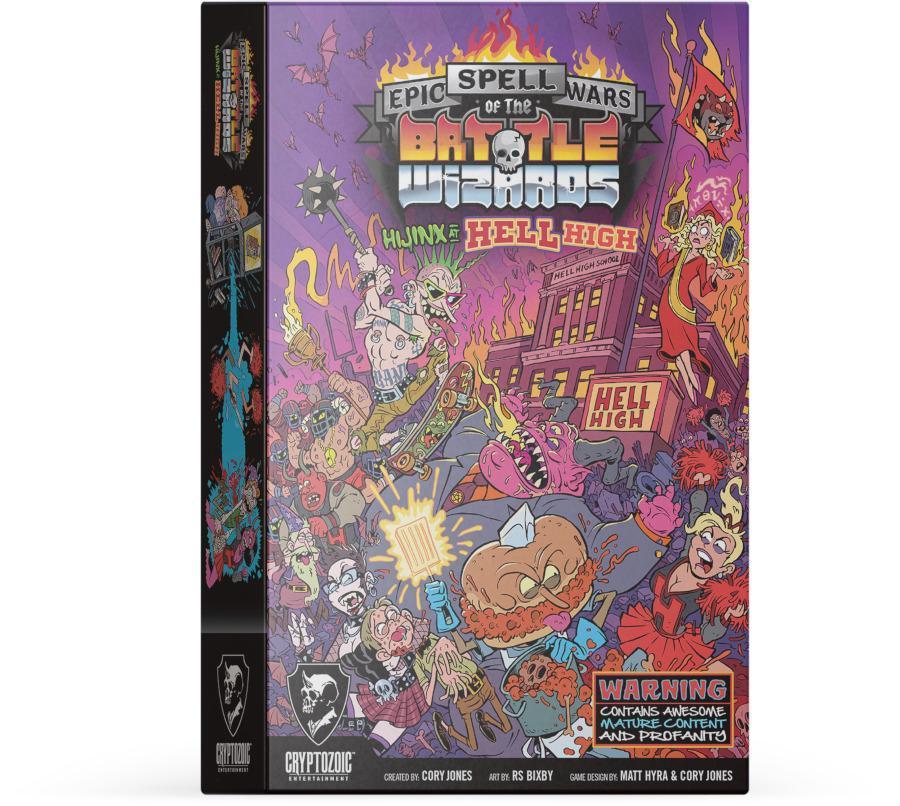 For more information, check out the Epic Spell Wars of the Battle Wizards: Hijinx at Hell High product page.

Batman has discovered a Dark Multiverse and unleashed evil versions of himself upon our world! The Justice League mus...
Read More
Previous article WONDER WOMAN AND HARLEY QUINN: POWERFUL IN PINK (CRYPTOZOIC EXCLUSIVE)