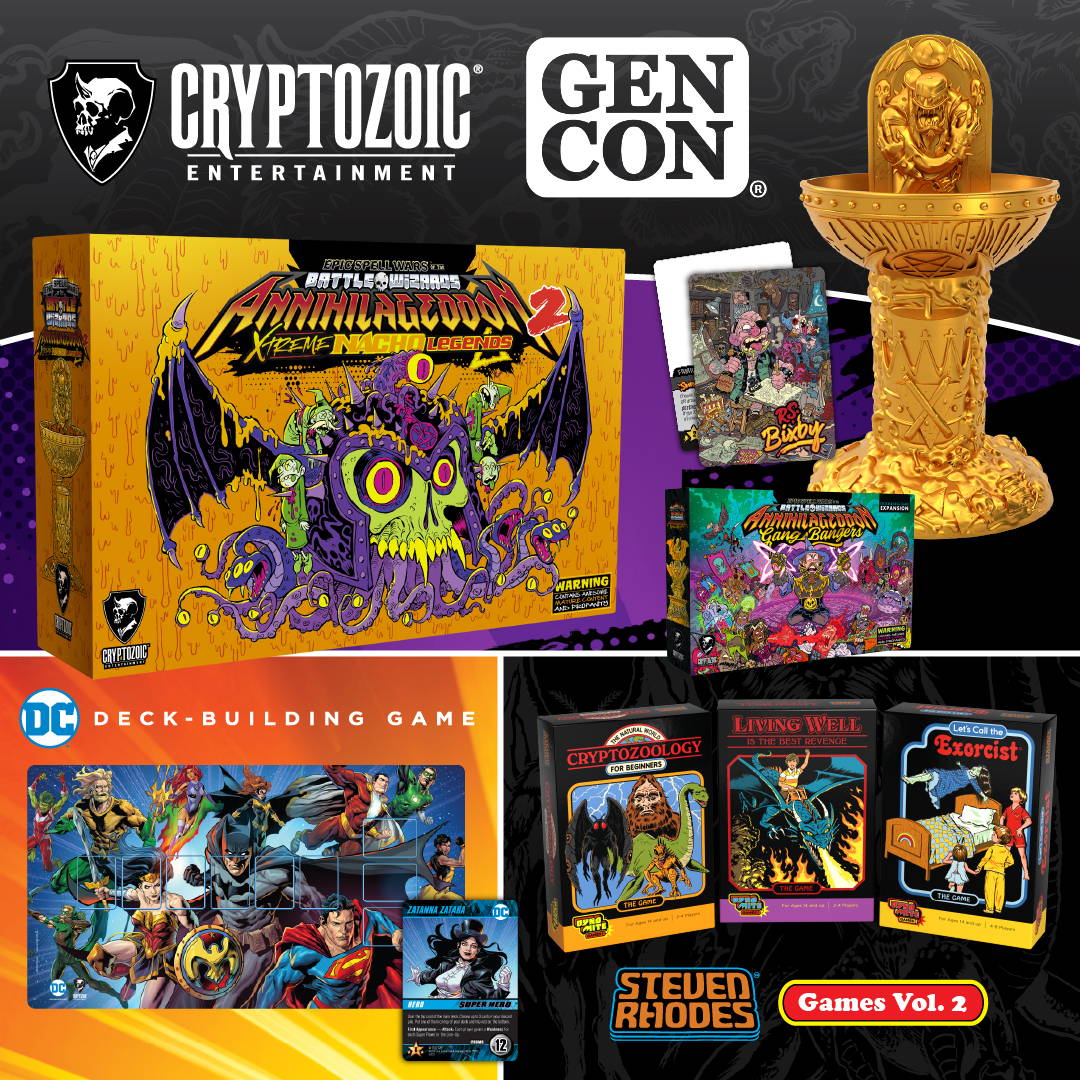 At Booth #403, there will be previews and demos of Epic Spell Wars of the Battle Wizards: ANNIHILAGEDDON 2 — XTREME NACHO LEGENDS, which will be available at retailers everywhere in late August. In addition, Epic Spell Wars: ANNIHILAGEDDON fans can buy the XTREME Nacho Power Trophy and limited copies of the Kickstarter-exclusive Gang Bangers expansion. All Epic Spell Wars purchases will include a R.S. Bixby Promo Card Set, while supplies last.

After a hugely successful Kickstarter campaign for the DC Deck-Building Game 10th Anniversary (over $1.08 million pledged), Cryptozoic will have early previews of the retail versions of DC Deck-Building Game: Injustice, Rivals – The Flash vs. Reverse-Flash, and Multiverse Box – Super Heroes Edition. In addition, fans can buy numerous products from the DC Deck-Building Game line, including a Gen Con-exclusive Super Heroes Playmat (which will also be a prize at tournaments). All DC DBG base game and expansion purchases will include a Gen Con-exclusive Zatanna Zatara Promo Card, while supplies last. This card will be given to tournament participants as well.

Moreover, Cryptozoic plans to preview all three upcoming titles from Steven Rhodes Games Vol. 2: Let’s Call the Exorcist, Cryptozoology for Beginners, and Living Well Is the Best Revenge. It will also sell the three best-selling Steven Rhodes Games Vol. 1 titles and the critically acclaimed Batman: The Dark Knight Returns — The Game. Last but not least, Cryptozoic will offer tournaments and demo events throughout the show for several releases, including titles in the DC Deck-Building Game and Epic Spell Wars series.

“We’re incredibly excited to be back at Gen Con and ready to show fans our newest Epic Spell Wars and DC Deck-Building Game products, and more!” said Cory Jones, co-founder of Cryptozoic and creator of Epic Spell Wars. “Epic Spell Wars: ANNIHILAGEDDON 2 may be the most fun you can have playing a deck-building game, so it will be the big highlight at our booth. We even have some copies of the Gang Bangers expansion that we’re going to sell, and once it’s gone, we are never printing it again! As always, DC Deck-Building Game will be well-represented with 10 years of products and previews of what’s coming very soon. And if you want exclusives, we’ve got them!”

The following Epic Spell Wars: ANNIHILAGEDDON products will be at center stage at Cryptozoic’s booth throughout the show:

Epic Spell Wars of the Battle Wizards: ANNIHILAGEDDON 2 — XTREME NACHO LEGENDS: Players can return to the Annihilageddon arena in the most intense deck-building gameplay legally available. Featuring the trademark mature themes and inappropriate art of the Epic Spell Wars series, this game introduces the Legendary Line-Up that provides a wild second row of cards to buy, XTREME Nacho Chips that let you activate special card abilities, and Mega Mayhems that throw even more chaos at players. It also includes 10 new oversized Wizards with their Familiars. This standalone game is compatible with all games and expansions in the Epic Spell Wars: ANNIHILAGEDDON series. It is available for PREORDER now for $44.99 and will be available at retailers everywhere in late August. 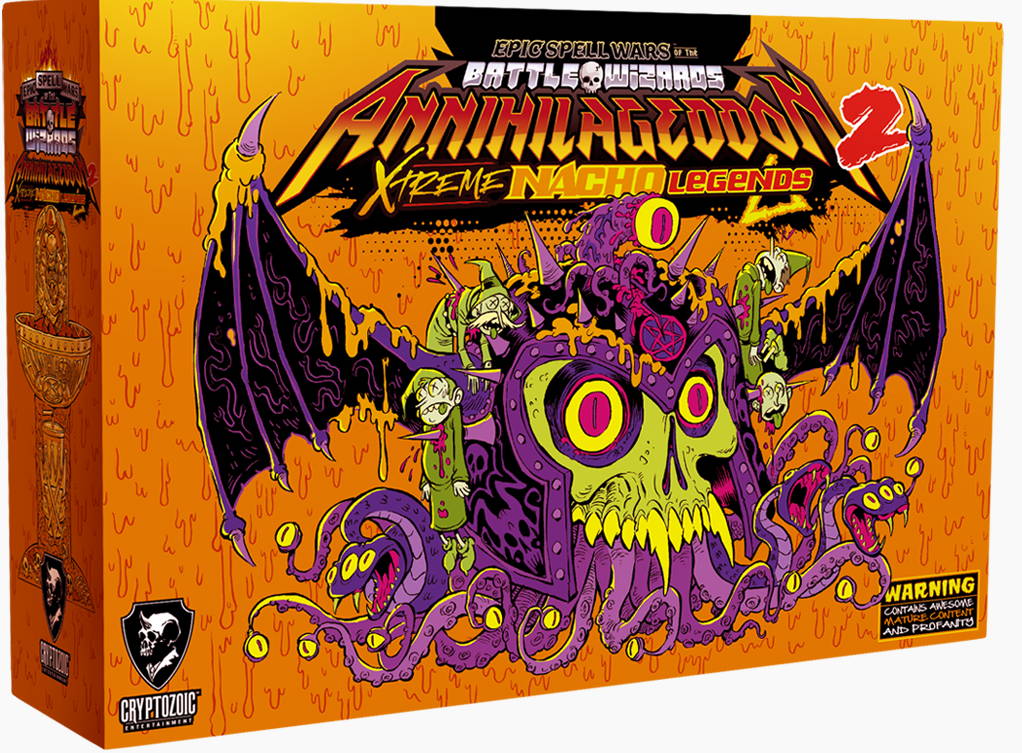 Epic Spell Wars of the Battle Wizards: ANNIHILAGEDDON — Gang Bangers: This Kickstarter-exclusive expansion requires either the first or second ANNIHILAGEDDON game, and gives players an entirely new way to play. Players get Gangs, each of which is unique and features different Gangsters that can be recruited to help defeat enemies. The expansion also replaces the Legend boss stack with Legend – Treasures, a pile of powerful cards that ramp up the damage. Cryptozoic will never print Gang Bangers again, but is offering very limited quantities for $100 apiece at Gen Con for those who missed the Kickstarter, while supplies last. 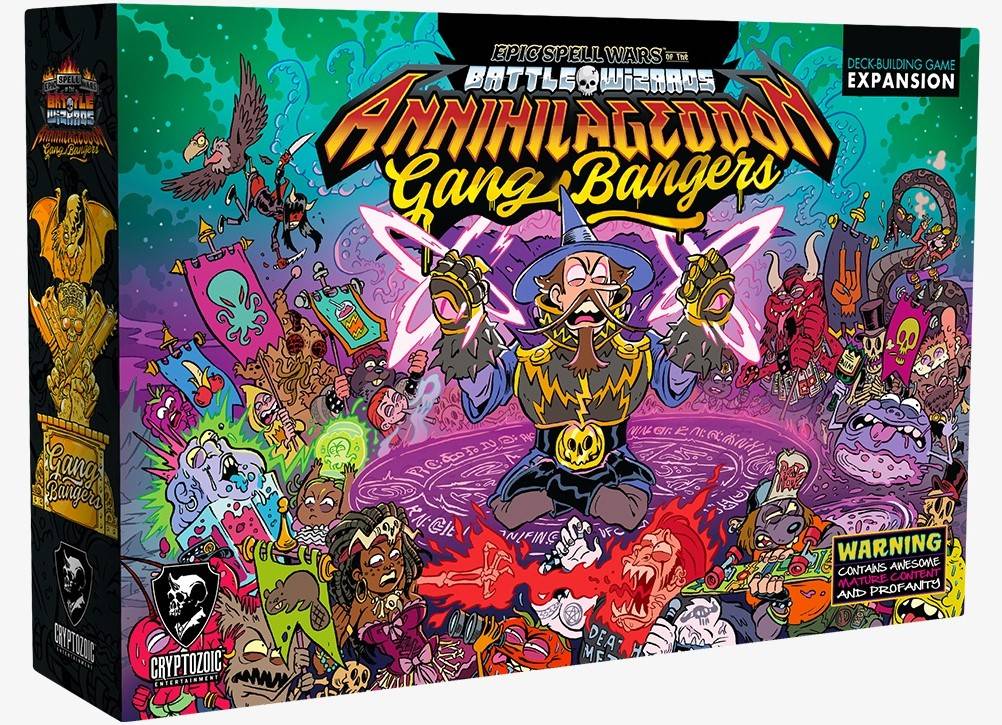 XTREME Nacho Power Trophy: This 11-inch gold-colored plastic trophy for Epic Spell Wars: ANNIHILAGEDDON 2 replaces the trophy standee in the game and holds the plastic XTREME Nacho Power Chips (which can be preordered now). It comes packaged in a full-color closed box and will be available for $29.99. 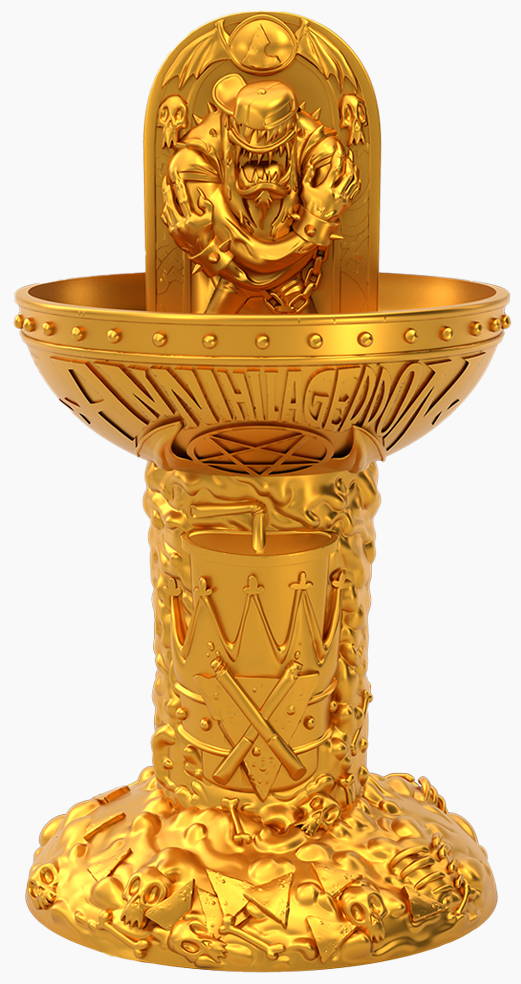 R.S. Bixby Promo Card Set: All Epic Spell Wars purchases at the show will come with this Gen Con-exclusive oversized Wizard card featuring R.S. Bixby (the illustrator behind the art for Epic Spell Wars: ANNIHILAGEDDON 2 and most of the games in the Epic Spell Wars series), plus the accompanying Familiar card that invites the player to explore their own artistic side. Any copies left after the show will be made available online for fans who could not attend. 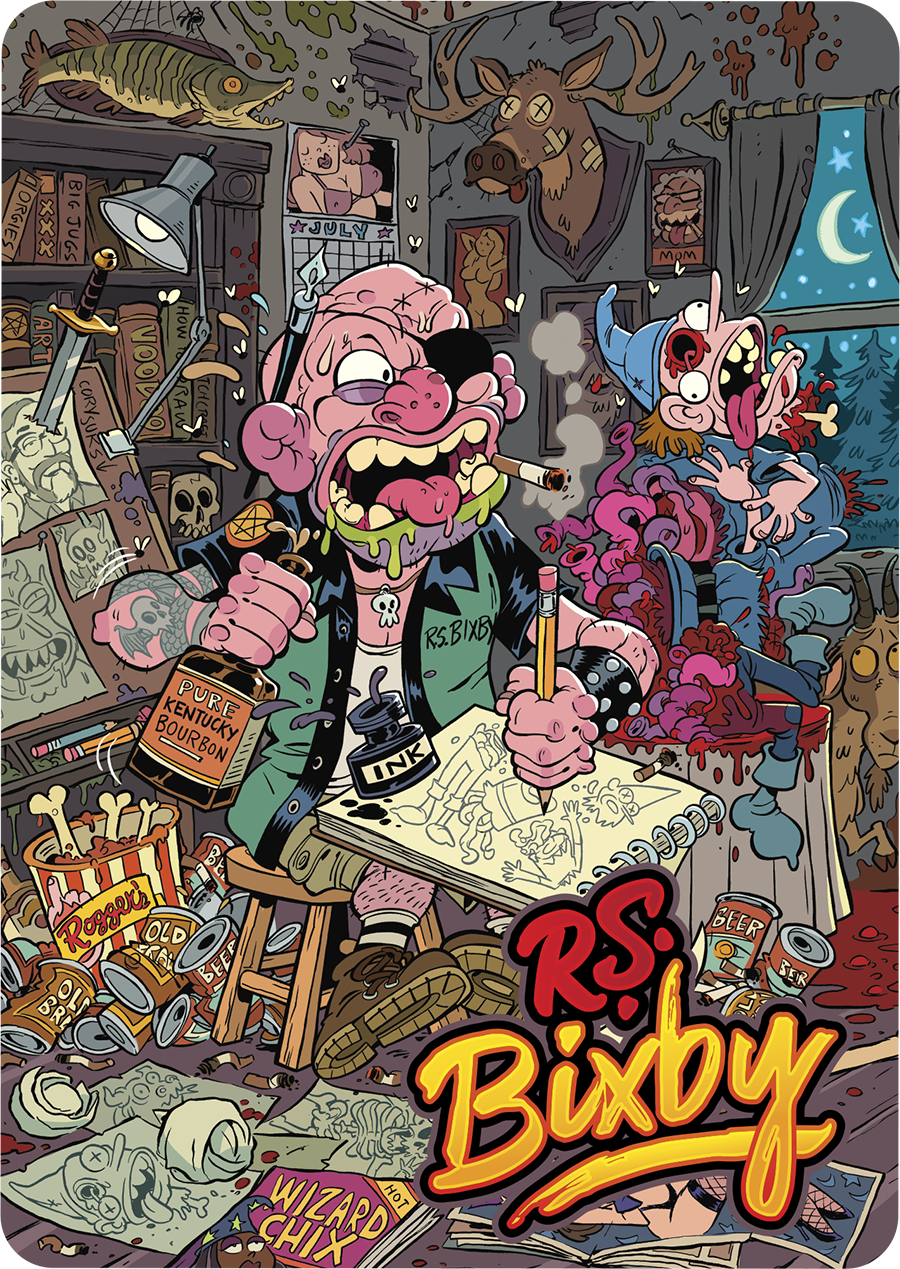 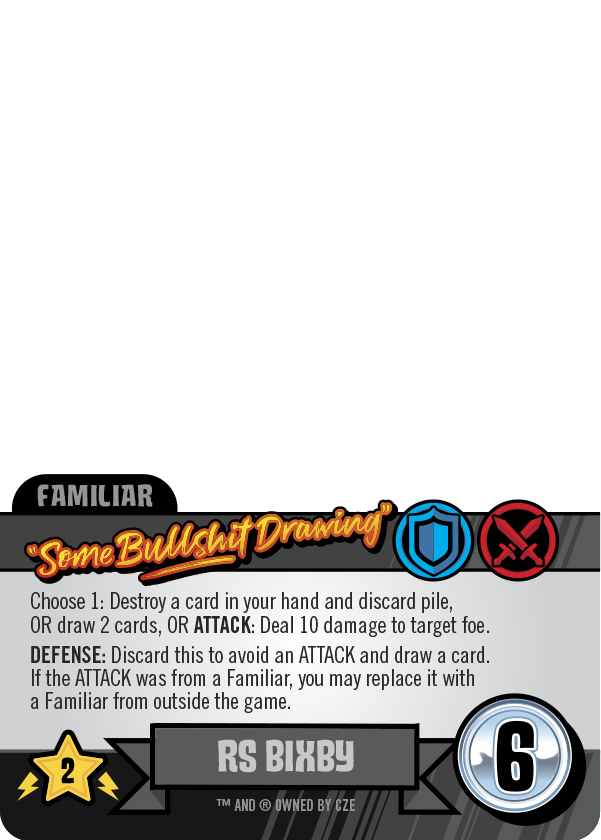 DC Deck-Building Game: Super Heroes Playmat: This Gen Con-exclusive playmat features the cover art from Cryptozoic’s new edition of the Multiverse Box (coming to stores next year), showing DC Super Heroes drawn by artist Omar Francia (Legends of the Dark Knight, Doom Patrol). It measures 29.5” x 16.5” and is designed to work with any DC Deck-Building Game product. The playmat will sell for $24.99 and will also be given as a prize at tournaments. Any copies left after the show will be made available online for fans who could not attend. 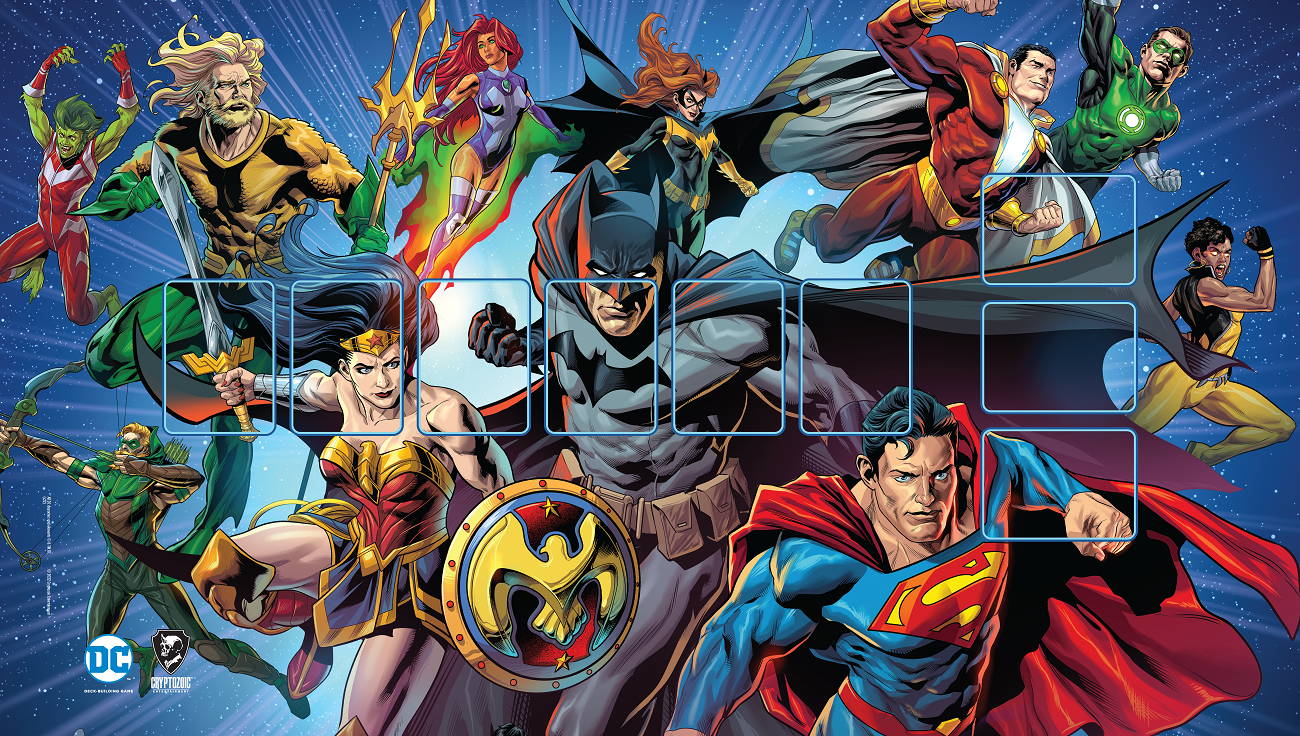 DC Deck-Building Game: Zatanna Zatara Promo Card: All DC DBG purchases at the show include this Gen Con-exclusive Super Hero card featuring Zatanna Zatara. Tournament participants will also receive this card. Attendees can buy the card for $4.99 without purchasing any other items. Any copies left after the event will be made available online for fans who could not attend. 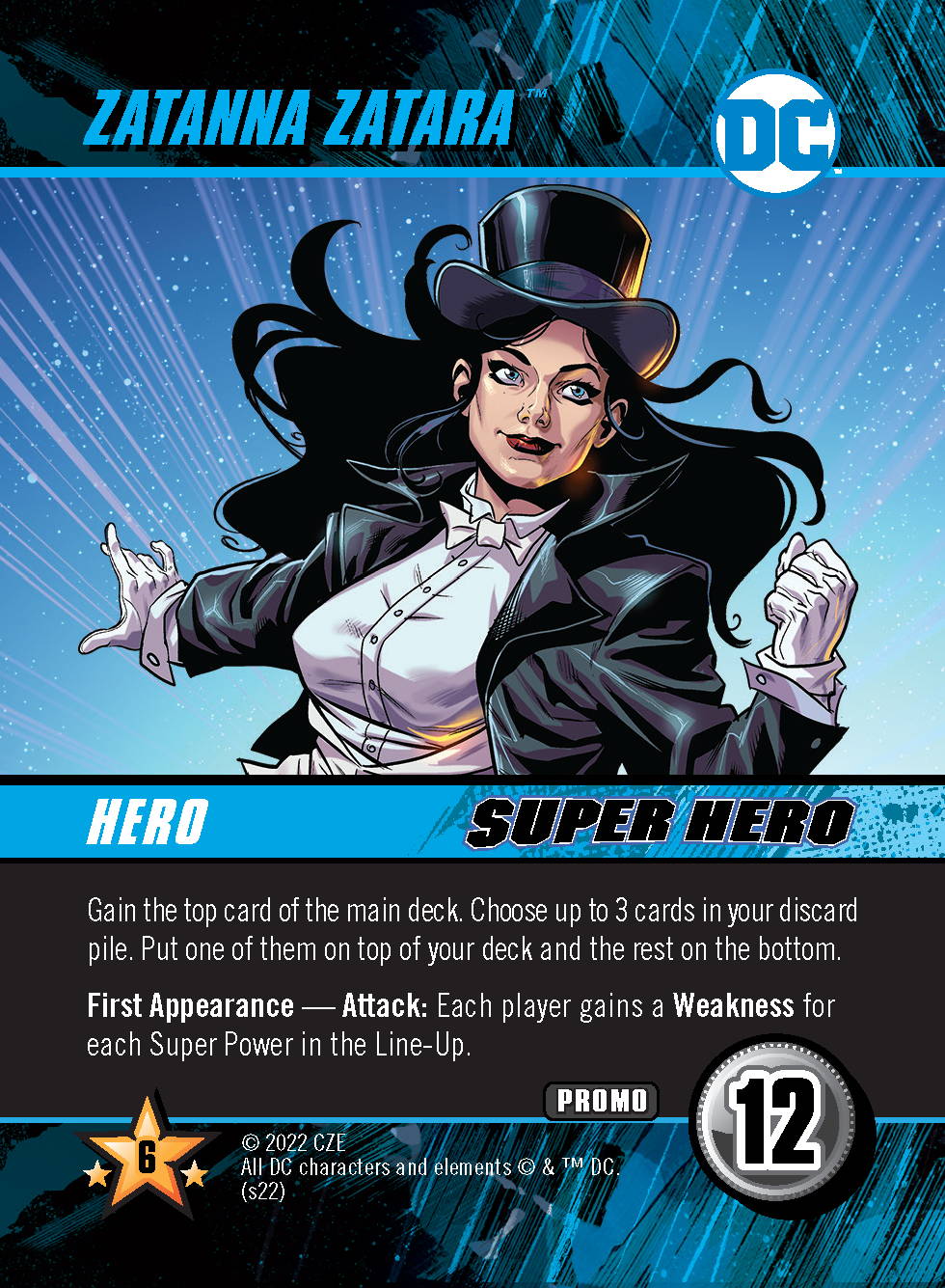 DC Deck-Building Game: Injustice: In this upcoming action-packed entry in the series, players enter the world of the hit Injustice: Gods Among Us video games and comic books as Batman and his insurgents battle against a tyrannical Superman. Players become Injustice versions of characters like Superman, Batman, and Wonder Woman and can charge their Meter to unleash devastating Super Moves. Arena cards move the gameplay to iconic DC locations. The game features cover art by Well-Bee (Marvels X) and game cards with both original illustrations and art directly from the Injustice comics. 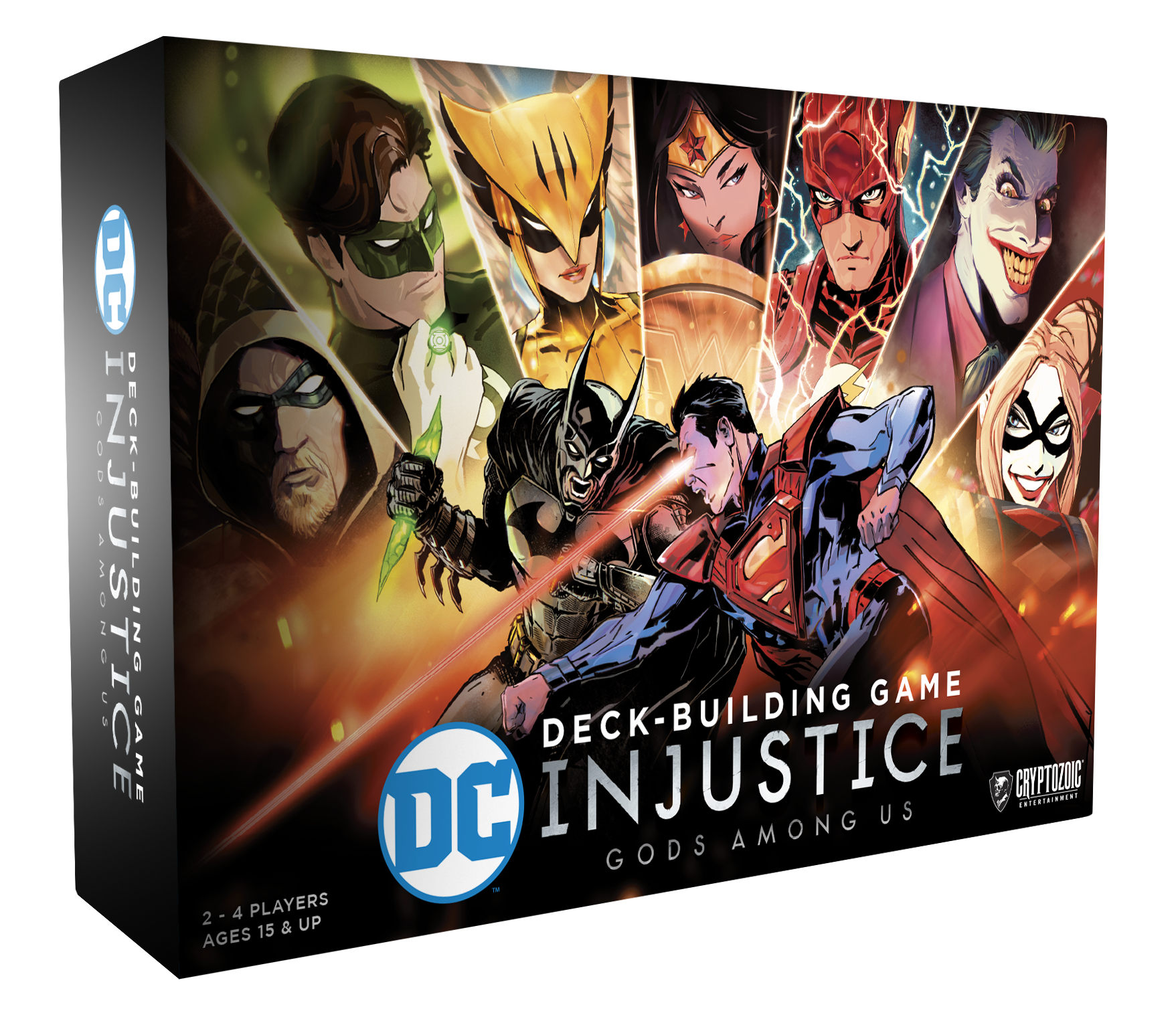 DC Deck-Building Game: Rivals – The Flash vs. Reverse-Flash: The upcoming entry in the Rivals series lets two players become part of the high-speed battle between the iconic rivals. Each player has three unique Character cards, each with more formidable abilities and a higher cost than the previous one. The game introduces “Speedster” cards that give players bonuses when they have momentum and new Weakness cards that stay in front of players. 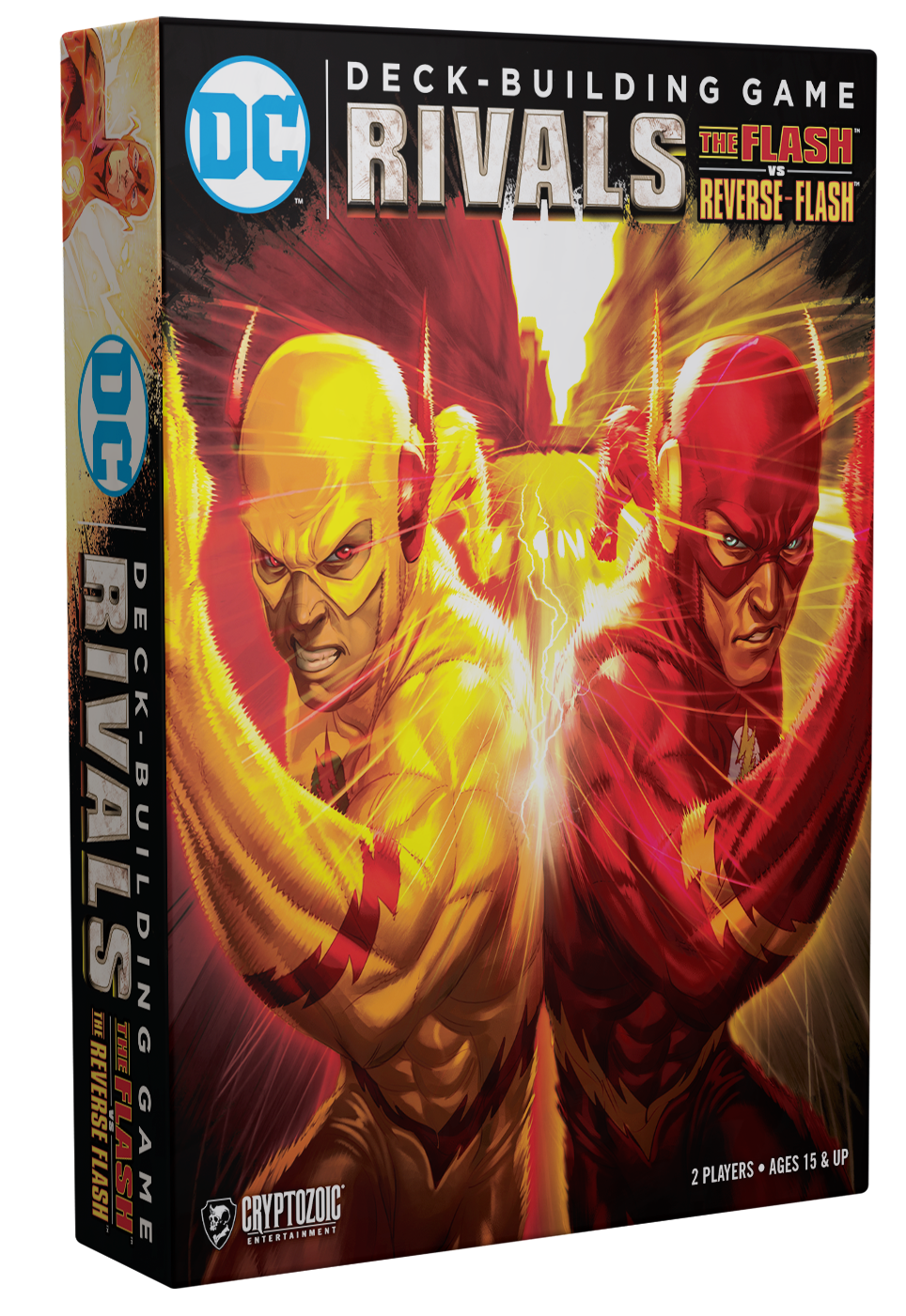 DC Deck-Building Game: Multiverse Box – Super Heroes Edition: This upcoming improved storage box provides a home for a player’s DC Deck-Building Game collection, fitting over 1,600 sleeved standard cards and 500 sleeved oversized cards, and features an original cover illustration by artist Omar Francia (Legends of the Dark Knight, Doom Patrol). Two Components Boxes fit inside the rows and can be used to store tokens and other game items. The Multiverse Crossover Pack features a mode that uses all the different sets in the box. Additional tokens and tiles allow players to use any oversized Characters in a DC Deck-Building Game: Rivals or Confrontations game and permit up to 6 players to play DC DBG at once. Finally, Cryptozoic will preview and sell the following games:

Steven Rhodes Games Vol. 2: Get ready to get immersed in the dark retro worlds of artist Steven Rhodes again! Like all products from Cryptozoic’s Dynomite Games sub-brand, these are games that anyone can learn, with enough depth and hidden complexity for the tabletop masters. Cryptozoology for Beginners is a creature-drafting set collection game, Living Well Is the Best Revenge is a dice game of strategy and chance, and Let's Call the Exorcist provides a spirited social deduction experience. Each game will be demoed at Cryptozoic’s booth and can be preordered now. 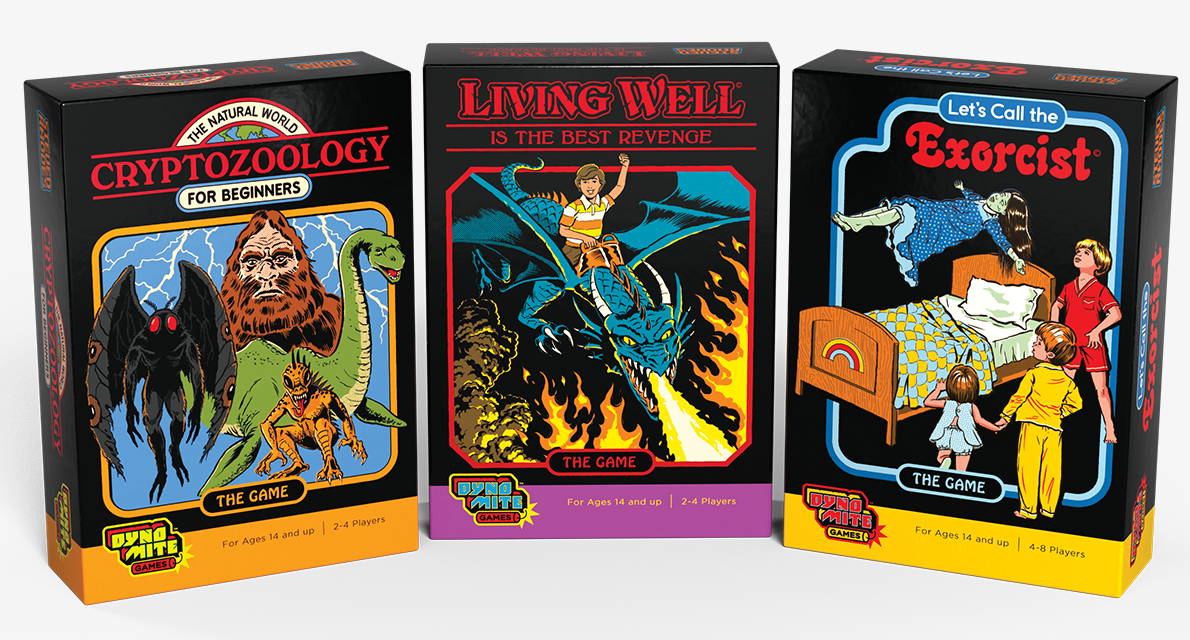 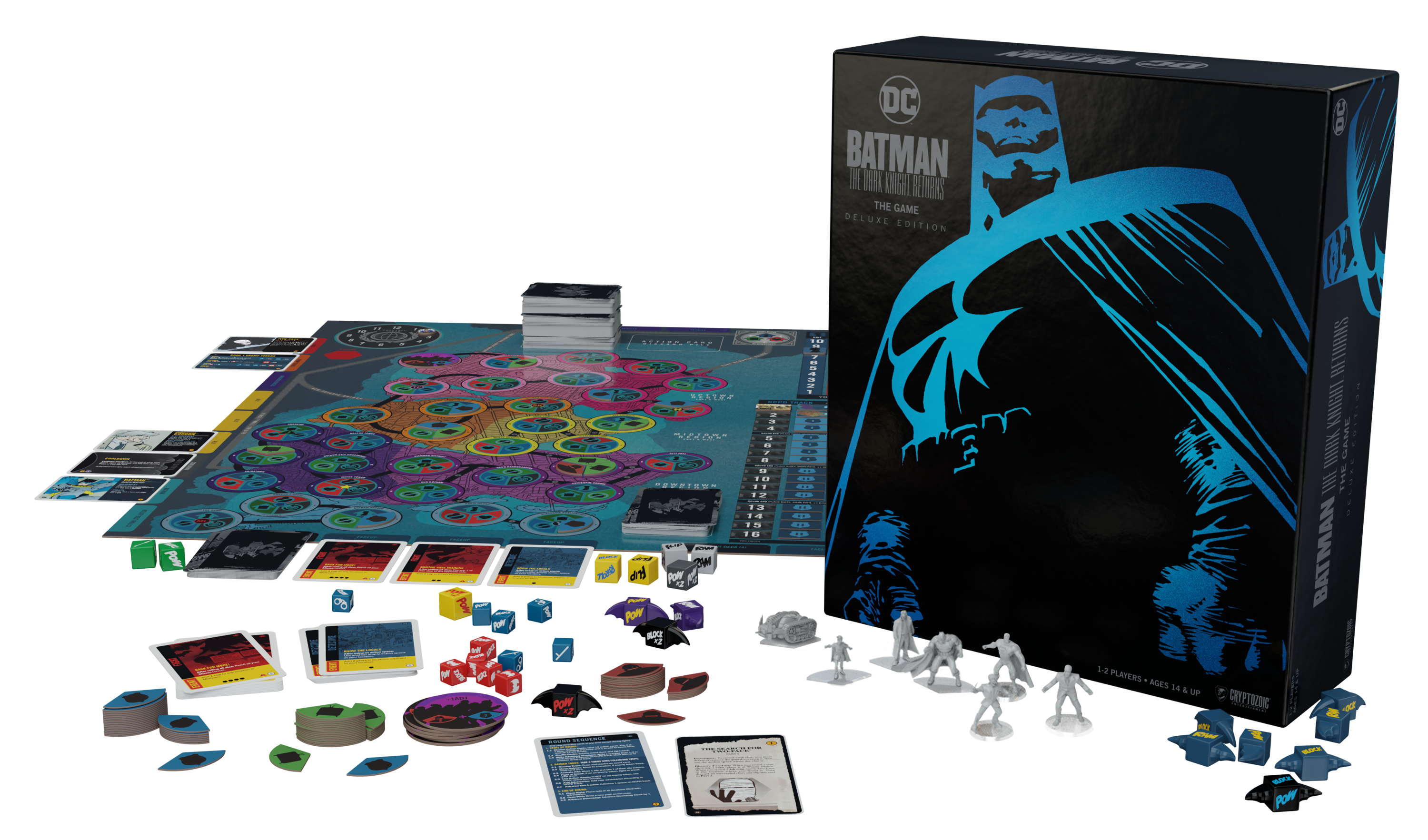 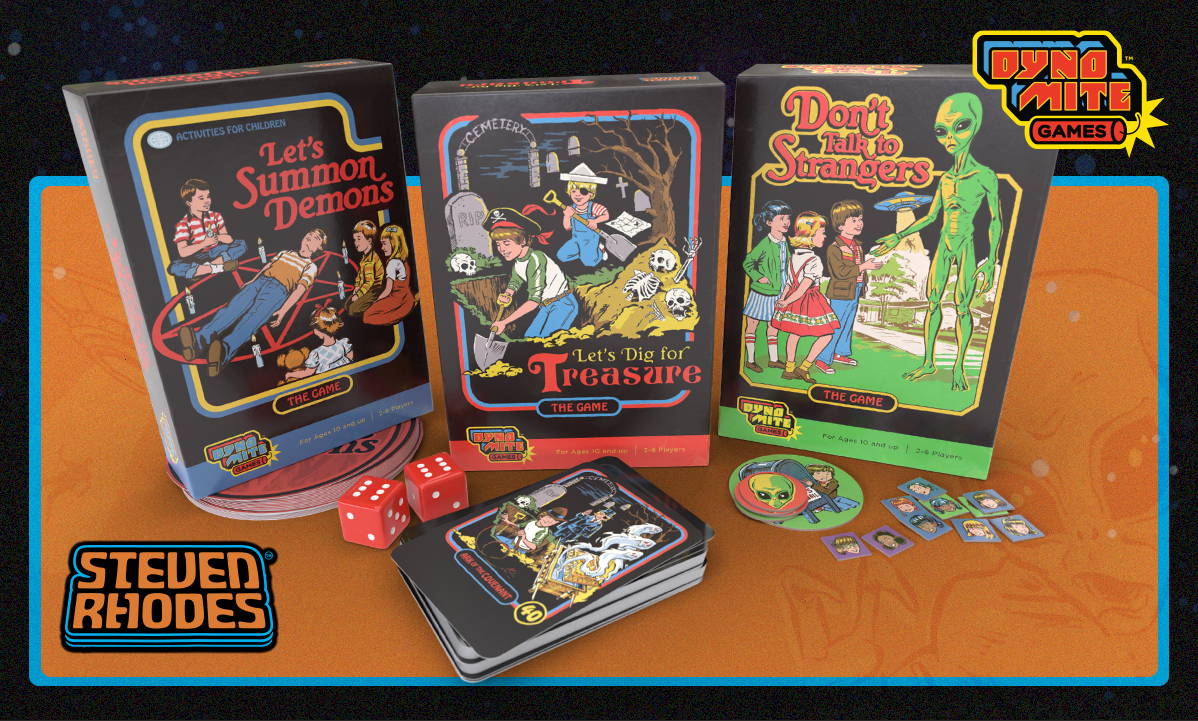